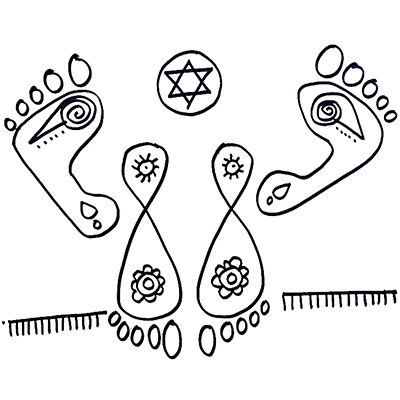 Hindu texts often declare that the four goals of human life are dharma (ethics), artha (wealth), kama (pleasure), and moksha (liberation). As one goes through Hindu scriptures one finds different types of sexual activity that can easily be classified as dharma sex, artha sex, kama sex, and moksha sex.

In dharma sex, the purpose of sexual activity is only procreation. There is no love here, no desire, and no attachment, just duty. The man approaches the woman during her ovulatory period with the sole intention of conceiving a child in her womb only when she invites him, for only she knows when her body is most ready to conceive. When she approaches a suitable man, whether he is her husband or not, he is obliged to do the needful; if she does not, he is cursed. We see this form of sex between rishis and their wives. Diti, for example, approaches Kashyapa at a time that is reserved for his evening prayers. Kashyapa is obliged to go to her but warns that the children born of the union will be asuras. Thus are Hiranayaksha and Hiranakashipu born. Kashyapa cannot say no as his wife has approached him during the ovulatory period making this sex dharma sex. In another story, Kardama obliges to have sex with Devahuti only for the purpose of having a child. After his wife conceives, he retires to the forest. Eventually Devahuti gives birth to Kapila muni who is renowned for his Samkhya philosophy. Vyasa rishi also goes to the widowed wives of Vichitrayvirya without any desire during their ovulatory period on instructions of his mother, Satyavati, to ensure they conceive sons.

In kama sex, the purpose is pleasure, nothing else. Here the focus is to indulge the senses and excite the mind and achieve orgasm. Homosexuality falls in this category as it has no procreative purpose. This is what the apsaras lure the rishis with. Kama, the god of desire, is feared as a great warrior who defeats the mightiest of sages. He only faced defeat before Shiva, the supreme ascetic, no one else. So it is ironical that Shiva is the fountainhead of the Kama-sutra, the treatise on lovemaking. It was transmitted by Nandi, Shiva’s bull, who witnessed the lovemaking of Shiva and Shakti, or overheard their conversation on the erotic arts, and was eventually put down in writing by sages such as Shvetaketu, Babhravya, Dattaka and finally Vatsyayana. Kama sex is seen as a lethal force that can distract the ambitious from the goal. Thus Vishnu takes the form of Mohini and by mere promise of pleasurable intimacy tricks the asuras so that they are denied a share of amrita, the nectar of immortality. Tilotamma, the apsara, uses it to cause a fight between the asura brothers Sunda and Upasunda. And finally, Agnivarna, the last scion of the famous Raghu clan to which Ram belongs, falls victim to the excesses of kama sex and dies premature death according to Kalidasa’s Raghuvamsa.

In artha sex, sex is a transaction. Sex is used as a service offered in exchange for material favours. This was most commonly used by women known as ganikas or courtesans who provided all kinds of pleasure to men who were willing to pay for their services. But it was not restricted to ganikas. In the Mahabharata, Satyavati’s father offers his daughter to Shantanu only on condition that he make her children the heirs to his throne. There is also the story of Yayati offering his daughter, Madhavi, to any king in exchange for two hundred horses. Thus sex becomes a commercial transaction. In the Kathasaritsagar is the story where a handsome man is invited to make a girl pregnant, as her husband is dead, and she needs a child; he is paid handsomely for it. In other folk story, a man who marries the widowed queen gets to be the king. Thus artha sex is not restricted to women alone.

Finally, there is moksha sex where sex is seen as a technique to break free from the unending cycle of birth and death. This idea is prevalent in Tantrik texts where sex is not about pleasure or procreation or commercial transaction; it is about gaining magical powers known as siddhi that enables one to control nature. In the Bhagavata one hears of Lakshmi seated on the lap of Datta, son of Atri and Anasuya, who holds a bowl of liquor in his hand, and is busy in secret rites that escapes the understanding of the sages who chance upon him. King Yadu learns that despite appearances Datta is cool and not burned by the fire of sexual desire, thus indicating his wisdom and liberation. In the narratives of Matsyendranath and Gorakshnath one offers hears reference to yoginis who live alone in the kadali-vana or banana grove, who have access to occult powers, and who will offer this only to one who is capable of having sex with them. This idea is found in stories of Padmasambhava, who took Buddhism to the Himalayan region too. Tara reveals this knowledge to Bodhisattva and Shakti reveals it to Shiva as Lakshmi reveals it to Datta, the ascetic form of Vishnu.

People argue if making love, or sex born of affection and love, where the desire is simply to please the partner is kama sex or moksha sex. No one is sure even though it is clear in this kind of lovemaking the ego takes a back seat.

Thus we find sex being seen in different ways in ancient Hindu scriptures. For the sages, dharma sex was recommended so that they could procreate children and please their ancestors without breaking the vow of celibacy. Kama sex and artha sex belonged to householders. Moksha sex was again reserved for sages who followed the ‘left-hand’ path associated with Tantra.