Forest and Field in Dharma Discussion 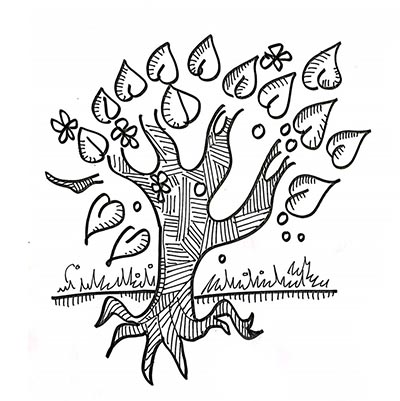 In the Sama Veda, the hymns of the Rig Veda are turned into melodies. These melodies are classified into two groups: aranya-gaye-gana or Forest Songs, and grama-gaye-gana or Settlement Songs. This divide plays a key role in the understanding of dharma. Forest is the default state of nature. In the forest, there are no rules.

The fit survive and the unfit die. The stronger, or the smarter, have access to food. The rest starve. There is no law, no authority, and no regulation. This is called ‘matsya nyaya’ or law of the fishes, the Vedic equivalent of the law of the jungle. This is prakriti, visualised as Kali, the wild goddess who runs naked with unbound hair, of the puranas.

Humans domesticate the forest to turn the forest into fields and villages for human settlement. Here, everything is tamed: plants, animals, even humans, bound by niti, rules; riti, tradition; codes of conduct, duties and rights. Here, there is an attempt to take care of the weak and unfit. This is the hallmark of sanskriti or civilization, visualised as Gauri, the docile goddess who is draped in a green sari, and whose hair is tied with flowers, who takes care of the household.

As children, we are trained to live in society — that is brahmacharya. Then we contribute to society as householders — grihastha. Later we are expected to leave for the forest — vanaprastha, and then comes the hermit life or sanyasa, when we seek the world beyond the forest.

According to the Buddhist SarvastivÃ din commentary, Abhidharma-mahavibhÃ sa-sÃ stra, forest or vana, is one of the many etymologies of the word ‘nirvana’, the end of identity, prescribed by Buddhist scriptures, which is the goal of dhamma, the Buddhist way.

Rama lives in a city, and so does Ravana. But Rama follows rules. Ravana does not care for rules. In other words, Ravana follows matsya nyaya though he is a city-dweller, a nagara-vasi. That is adharma. If Ravana uses force to get his way, Duryodhana uses his cunning, also focusing on the self rather than the other. This is adharma. Dharma is when we function for the benefit of others. It has nothing to do with rules. Which is why Krishna, the rule-breaker, is also upholding dharma, for he cares for the other.

In the forest, everyone is driven by self-preservation. Only humans have the wherewithal to enable and empower others to survive, and thrive. To do so is dharma. It has nothing to do with rules or tradition. It is about being sensitive to, and caring for, the other. We can do this whether we are in the forest, or in the city. And so it is in the vana or forest, that Krishna dances with the gopikas, making them feel safe even though they are out of their comfort zone.

Without appreciating the forest and the field, Kali and Gauri — the animal instinct and human capability — any discussion of dharma will be incomplete.