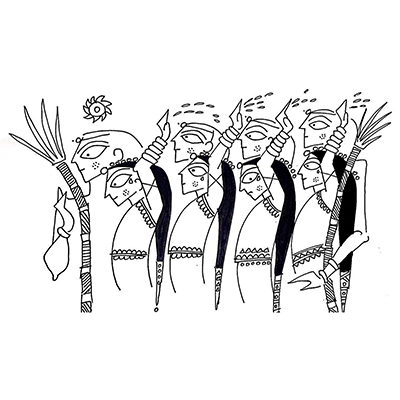 Suriya, the daughter of the sun-god, marries the twin-gods, the Ashwins, and rides with them on their chariot. So says the Rig Veda. Later, we are told, that the Ashwins do not actually marry her: they simply woo her for her real husband. In the marriage hymn, Rig Veda X.85, the bride is given to Soma, then Gandharva, then Agni, and only then to the husband. What does this mean? Does it mean that at one time, women could have many husbands simultaneously?

When people refer to Indian “tradition” they assume it was fixed for thousands of years, before the Muslims arrived a 1,000 years ago. But that is simply not true. Hindu wedding rituals contain ideas from Harappan and Vedic times, to practices that came with the Greeks, Sakas, Kushan, Huns, Turks, Afghans, Persians, Arabs, even Europeans. Over time, the concept of marriage changed as did the rituals.

The “sindoor” and “bangles” originated in Harappan civilisation while the “mangal sutra” has Dravidian roots. Did these exist before the Rig Veda was composed? We can only speculate. Rajputs may talk of the ancient practice of Sati, widows leaping into the funeral pyres of warrior husbands, but the Harappans and the Dravidians buried the dead. Harappa has at least one grave of a man and woman buried together. Were they husband and wife? Did they die at the same time? Or, was this done out of respect for their love? We don’t really know.

North India is against cousin marriages, and even sagotra and sapinda marriages. But, in South India, one finds cousin marriages, an old practice to ensure the land stays within the larger family unit. In the Bhagavata, we learn how Arjuna marries his cousin-sister Subhadra and how Subhadra’s son, Abhimanyu, marries her brother Balarama’s daughter, Sasi Rekha, and how Rukmini’s son, Pradyumna, marries her brother Rukmi’s daughter, Rukmavati. Are these stories from South India, or from North India, where Krishna story is located?

The “seven-step ritual” comes from Rig Veda. But, back then, the ritual was for all forms of agreement, not just the wedding union. The “Kashi-yatra” ritual at Tamil Brahmin weddings evokes fear of a time when fathers feared sons would become Buddhist or Jain monks. The “baraat” comes from the Puranic story of Shiva’s wild hordes accompanying him to Himavan’s house to fetch the bride. The “sehra” of the horse-riding groom, practiced by Muslims also, comes from Central Asian custom of preventing the “evil eye” from falling upon the handsome young groom as he set out to fetch a bride.

While “haldi” (turmeric ritual) has Hindu roots, the “mehendi” (henna ritual) has Islamic roots. The popular “sangeet ceremony”, once a North Indian practice, full of bawdy songs, is now a family song-and-dance affair, of all Indian weddings around the world, thanks to Bollywood. The “engagement ring” is a very Christian idea.

Hinduism never saw marriage as a contract; it was merely a rite of passage. The “wedding certificate” though seemingly secular, has roots in Judeo-Christian-Islamic idea of documented covenants made before witnesses. And, all marriages were not for “eternal” or for “seven lifetimes”. Sages like Jaratkaru and Kardama married only to produce children and repay debts to ancestors, and then abandoned their wives. These are “histories” that Indian culture groups prefer not to discuss.