Five lessons India Inc can learn from the Pandavas 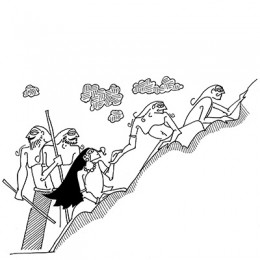 After the victory at Kurukshetra, after 36 years of being kings, the Pandavas renounced the world, give the reins of the kingdom to Arjuna’s grandson, Parikshit, and set out for the forest and beyond, to the mountains. They were convinced that owing to their meritorious deeds, they would be allowed to enter Swarga, the paradise of Indra, with their mortal bodies. Unfortunately, this did not happen. Draupadi slipped and fell, then Nakula, then Sahadeva, then Bhima and then Arjuna. For they were not perfect. Their crime? Draupadi had played favourites and preferred Arjuna over her other husbands (folk narratives say she secretly loved Karna). Nakula was vain about his looks that made everyone who saw him fall in love with him. Sahadeva was arrogant that he had knowledge of the future that no one else had. Bhima was a glutton and Arjuna insecure.

These are the lessons for the corporate world that we can learn from the Pandavas, the great heroes of the Mahabharata.

1) Do not play favourites when you are managing a team.

2) Do not be vain about one’s charisma.

3) Do not be arrogant about one’s predictive abilities.

4) Do not be greedy, indifferent to other people’s needs.

5) Do not be insecure when you see other talented people.

Easier said than done, considering they were mentored and coached by Krishna himself, who is considered kingmaker, strategist, God personified. In conference after conference, successful entrepreneurs are invited to share their stories. This is meant to inspire people, motivate them, give them tips about success and failure. Lessons follow lessons, presentations follow presentations, workshops follow workshops. We want to learn, we want to be inspired and motivated – but still the rate of success of these workshops and presentations remains non-measurable and unpredictable. Perhaps because the Pandavas are not Krishna. They exist in different bodies and different contexts; each one is unique with different capabilities and capacities. Knowledge transmission does not guarantee success, or failure. What works for one does not work for another. We have to forge our own path as everyone exists in a different context.

Perhaps if Draupadi did not play favourites between her husbands, she would not be as attractive and desirable. Her husbands would not desperately compete to please her. She would not have been able to manipulate them as she did, getting Bhima to kill Kichaka during the years in hiding even if it meant premature exposure for the Pandavas. And Nakula, about whom we know nothing, would remain invisible, had it not been for his beauty. Vanity was the only thing going for him in a world where he was surrounded by talented brothers who overshadowed him. And while Sahadeva was blessed with occult powers and foresight, no one showed him how to cope with such great powers. He behaved as any human being would: use his talent to think of himself as superior to others. Would Bhima be the aggressive force had he not been a glutton? Would Arjuna practice as hard as he did had he not been insecure? Sometimes what is our negative trait is also our positive trait. When we win, our boorishness comes across as determination. When we lose, our kindness comes across as weakness.

The Pandavas won. Did they win because they had good qualities? Or because they took the right decisions? Or because things just worked their way? They had thought just as they had won Hastinapur, with the help of Krishna, they would also earn a place in Swarga. But that did not happen. Left on their own, they failed.

Yudhishtira was the only one who was allowed to enter paradise with his mortal body. He refused to enter until the gods allowed the dog that accompanied him to enter too. For he believed in equality. But inside he saw the Kauravas, enjoying Swarga as their demerits on earth had been washed away. This angered Yudhishtira. He forgot all about equality especially since his brothers were still suffering in hell for their negative qualities. The great king was reminded that his refusal to indulge the Kauravas made him a good king on earth; but perhaps was not a good quality in heaven.