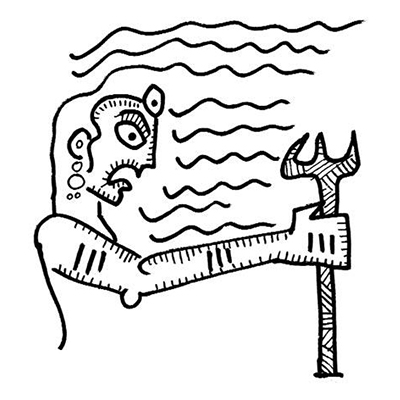 The Vedas, which are over 3,000 years old, refer to a deity called Rudra who is fierce and feared. Is he the Shiva we know today, the hermit who married Parvati, daughter of the Himalayas? We can only speculate in hindsight. The word Shiva is used for the first time only in the Upanishads. And we hear a clear story of Shiva only in the epic Mahabharata, that reached its final written form in Sanskrit only about 2,000 years ago.

In the Shanti Parva, Yudhishtira asks the dying Bhisma, how did fever come into existence? And in response, Yudhishtira tells him the story of Daksha’s yagna, and how he, in keeping with Vedic practice, refuses to offer Shiva a share of the sacrifice. This angers Shiva’s wife, Uma, daughter of the mountains, who argues that he deserves a share. Shiva’s anger then takes the form of fever and attacks Daksha as well as the gods who attend his yagna, even the yagna that tries to escape in the form of a deer. Finally, Shiva is appeased, the yagna is restored, a share offered to Shiva and Shiva distributes his wrath as fever across the universe.

This is the first time we hear the now famous story of Daksha’s yagna being destroyed by Shiva. However, here Sati is conspicuous by her absence. Daksha is not Shiva’s father-in-law. He is simply the archetypal Vedic priest performing a Vedic ritual without offering a share to Shiva, as was the practice, until Shiva’s wife, not Sati but Parvati, protests. Here, there is no reference to Sati’s suicide or Shiva’s outrage and the heartbreak that follows, or any reference to Sati’s body being cut up to give rise to the Shakti Peethas.

The story is retold differently in the very next section of the Mahabharata itself. When Janmejaya asks Vaisampayana to elaborate the story Bhisma narrated. In this elaboration, Shiva and Parvati both get angry and their anger takes the form of Virabhadra and Mahakali who proceed to destroy Daksha’s yagna. The Rishi Dadichi alone protests the refusal to offer Shiva a share of the offerings in Daksha’s yagna. Peace is restored when Shiva is accommodated.

Here, we do not get a description of Shiva except through the insults of Daksha – that he is associated with inauspicious things, ghosts and crematoriums. It is much later in the Puranas that we visualise him as ash-smeared with matted hair and snakes around his body, and as the heartbroken husband of Sati. Kalidasa in Kumarasambhava informs us 1,700 years ago how Shiva burnt Kamadeva, frightening Indra. In the Devi Bhagavata Purana, dated to 1,400 years ago, we first hear of Sati’s body being linked to Shakti Peethas, and thus pilgrimage spots. In the Bhagvata Purana, that reached its final form 1,000 years ago, we have the most elaborate version of Shiva’s story, where we learn that Shiva’s indifference to Vedic rules leads to the conflict between Daksha and Shiva.

Those who see mythology as proto-history believe that as Vedic practices waned, and temple-based Agama traditions rose, followers of Vedas became closely associated with Vishnu worshippers. Vishnu was identified with the yagna and was seen as ‘preserver’ of the yagna and protector of Brahma, the ‘creator’ of the yagna. They both opposed Shiva who was the ‘destroyer’ of the yagna. Conflict probably took place in the Himalayan region at the point where Ganga leaves the mountains and enters the plains. The rivalry is indicated by conflicting names of pilgrim spots there such as Hari-dvar (doorway to Vishnu) also known as Hara-dvar (doorway to Shiva).