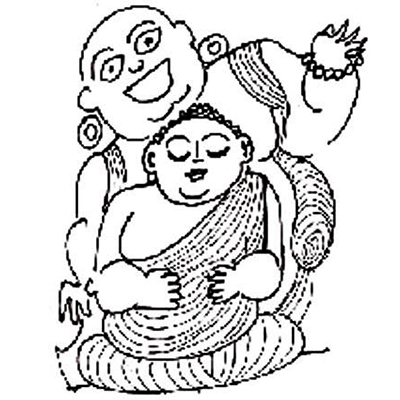 This is a story of two fat, Buddhist monks. One story comes from China and the other comes from Thailand. Many people link them with the Buddha, but they come from various local traditions that were absorbed into Buddhism.

The first is the popular Laughing Buddha. In China, he is called Budai. In Japan, he was called Hotei. He is a semi-historical Chinese monk, who lived 1,000 years ago who became part of the Zen pantheon. This was done in the hope that the induction of such likeable, odd figures would call people to follow Zen Buddhism. The story goes that he was a fat, bald monk who wore a robe and carried few possessions in a sack cloth. But, although he was poor and had nothing, he was always content. He would always smile, laugh and entertain children with song and dance. Children adored him and followed him, whenever he entered the village. He would laugh and pat his large belly, give them little gifts from his bag. He never complained, slept without a blanket and always seemed satisfied. Thus, his image became associated with contentment and abundance. Many people claimed he was Maitreya Buddha or he will be reborn as the Maitreya Buddha or the Buddha of the future. Clearly, the Laughing Buddha had his origin in local Daoist tradition. His image is nowadays used as part of Feng-Shui to attract positive energy and fortune. Some people believe that the idea of Budai spread to the Christian world inspiring the character of Santa Claus.

The second fat monk is Phra Sankajai from Thailand. Known as arhat Kaatyana or Kaccana, his image is very much like the Laughing or Fat Buddha. Except he is not bald, he has matted hair like the Buddha and he is in a meditative posture. Not laughing; but serene. He wears an upper garment , like Buddha, covering one shoulder, leaving the other one exposed. By contrast, the Laughing Buddha exposes his chest. The story goes from Thai folklore that Phra Sankajai was so handsome that even men who man saw him fell in love with him, and wished he was a woman. In another story, he overheard angels comparing him to the Buddha and considered this to be inappropriate. Shamed by both these incidents, he decided to change his body into an unpleasantly fat one so people would leave him alone. There are many stories in mythology where women make themselves ugly, so that they can pursue the spiritual path. This is one of the rare examples where a man undergoes changes and makes himself ugly (though being fat may not be ugly in many cultures), to follow the spiritual path.

The idea of a fat god is popular in many cultures. They embody contentment and abundance. In India, they are called yaksha moortis and are associated with abundance. Ganesha falls in this spectrum of images. In many South Indian weddings, couples are given the image of a fat old couple, known as tata-tati, or grandpa-grandma, chewing betel and seated on a swing. They represent a life well lived.