Explanation from mythology: Why people voted for Modi, Brexit and Trump — and against Arab Spring 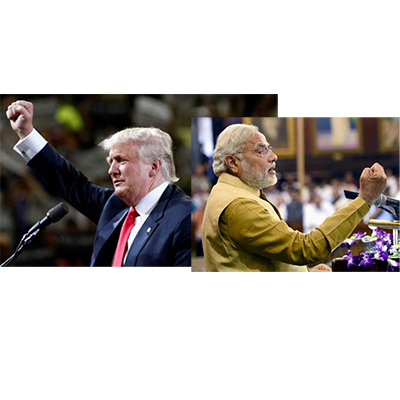 Modern liberalism believes in equality as well as diversity. And that is the problem, for equality is the very opposite of diversity. When Indian, British and American voters are choosing Narendra Modi, Brexit and Donald Trump, many commentators feel the voters are rejecting the virtue of equality that informs the Idea of India, the European Union and the US Constitution and are seeking to return to old inequalities. But what the voters are simply rejecting is homogeneity, the dark side of equality. The same is true when the Arab Spring fails. For the doctrine of equality in the global village threatens tribal identities. The fight for tribal identity, the right to be either caste Hindu, British national, white heterosexual male, or orthodox Muslim, even a woman, or queer person, invariably unleashes hierarchy, the dark side of diversity.

The only place where equality and diversity coexist is in nature. Nature has no favourites: all animals have to fend for themselves to survive. It is a true meritocracy where the strong and smart thrive and the unfit die. In the process of competing and collaborating for food, nature creates food chains and pecking orders, with their inherent hierarchies. Thus, in nature, there is equality and diversity, but at the same time there is also meritocracy and hierarchy that do not care for the meek. In order to provide for the meek, the not-so-smart and not-so-strong members of the tribe, humans, broke free from nature and created culture.

What binds a tribe together is a story that creates a common worldview. Historian Yuval Harari, author of Sapiens, refers to this story as collective fantasy that enables cultural collaboration. However, these fantasies are true to the believer, and false to the outsider. Historians who are outsiders have the luxury to call them fantasies. These are the mythologies of the world.

Abrahamic mythologies speak of equality — God created man in his own image. They also speak of Chosen People, duty-bound to follow the commandments of the one God. No one is exempted from God’s rule, even the prophet Moses and the king David are punished for transgressions. Thus, there is no hierarchy in the tribe. But there is homogeneity.

Modern society is based on humanist philosophies based on equality and justice. It informs modern left liberalism too with their notions of social justice aimed at battling social inequality. It claims to be secular, hence free of religious affiliation. However, its founders from Europe and America were raised in Christian and former Christian families, in Catholic or Protestant ecosystems. Not surprisingly, humanist philosophy aligns itself to Abrahamic mythology.

It frowns on all kinds of hierarchy and privilege and prejudice based on race, ethnicity, gender, sexuality, even nationalism. It demands that all humans be entitled to equal access to opportunities. Declaration of Human Rights is the commandment here. God is manufactured by the people via representative democracy of nation-states. All nations, developed and developing, are seen as equal. All nations have to provide the same rights to all their citizens. Homogeneity is demanded across nation-states. Failure to provide rights gives the global village the moral right to intervene in the private matters of a nation-state.

But monotheistic Abrahamic mythology, which believes in one God, has always had a problem with what constitutes God, who is the true messenger of God and what constitutes the Chosen People. A thousand years ago, this led to the crusades between Christians and Muslims, both of whom subscribed to the same mythology. Today, it is the battle between secular humanist forces and Muslims radicals, each one, ironically, offering equality and justice to those who submit to their respective commandments. Modern commentators fail to recognise that modern nation-state secularism, by excluding religion, is subscribing to the same Abrahamic mythology as radical Islam that is equally intolerant of heterogeneity. The one God tolerates the worship of no other gods, who are deemed false gods.

European Orientalists of the 19th century and American Orientalists of the 20th century see Hinduism as a doctrine of inequality that for centuries has instituted the caste hierarchy in Indian society. When Hindus argue that the doctrine of atma found in the Bhagavad Gita establishes the equality of all living beings, their arguments are dismissed as upper-caste or savarna apology.

This Euro-American construction and deconstruction of Hinduism is based on the equality templates of Abrahamic mythology. They did not, and still do not, see how Hindus are able to worship different gods (diversity) while favouring one as per need and context (hierarchy), while still insisting they are all manifestations of the same divine (equality). This complexity is dismissed as jugglery to get away with brahminical hegemony.

The Western understanding of India remains firmly through the lens of equality established by Abrahamic mythology. It refuses to appreciate Hindu mythology as a worldview seeking to make room for diverse categories (tribes/caste/communities/gods) and balancing the consequent hierarchy with the Upanishadic doctrine of atma. One cannot help but wonder if this is Western prejudice, what Hindu supremacists describe as Hinduphobia.

German philosophers saw the conflict between Hindus and Buddhists as mirroring the conflict between Catholics and Protestants, as revealed by Vishwa Adluri and Joydeep Bagchee in their book, The Nay Science. This continues even today as American academicians point out how Brahmins have “othered” Muslims and Dalits, curiously similar to the way the West has been accused of othering the East, as argued by Edward Said in his book, Orientalism. Thus the Brahmins are equated with Catholics (Germans and Americans tilt towards Protestantism).

An explanation of Hinduism’s caste system is not a justification for atrocities on Dalits. However, it is always seen as such for the doctrine of equality is essentially intolerant of ideas that are different, hence is continuously arguing against everything dissimilar.
Which story is better?

The Idea of India, the European Union, the American Constitution, even the Arab Spring, are based on equality, hence drift towards homogeneity, since social justice challenges all social inequality. This drift towards homogeneity threatens privileged powerful religious, caste, ethnic, racial and gender groups, be it the Patels, Jats, Marathas and the various tribal communities of the North East in India, to the British, the white Anglo-Saxon Protestant heterosexual male, and the orthodox Muslim man. Abrahamic mythologies glamorise shaming the guilty and the powerful — as everyone is expected to be humble before God and God’s law. So we find activists, missionaries of humanist or rather left liberal philosophies, doing the same to those who do not align with the Declaration of Human Rights and corner a larger share of the resource pie (just as the God of Abraham got angry with the Chosen People when they took more than a fistful of manna during the Exodus).

Mythology of equality demands homogeneity of thought to prevent the rise of hierarchy. It is therefore against difference, which is a cornerstone of diversity. Those who protest against Modi, Brexit and Trump, and for the Arab Spring want to be part of the liberal global village where everyone is equalled by a homogenising process. Those who vote for Modi, Brexit and Trump, and against the Arab Spring, however, seek the very opposite — the desire to be unique, different, and hopefully privileged, in a diverse global village. Hierarchy, or inequality, is a natural consequence of this pursuit. You cannot have one without the other