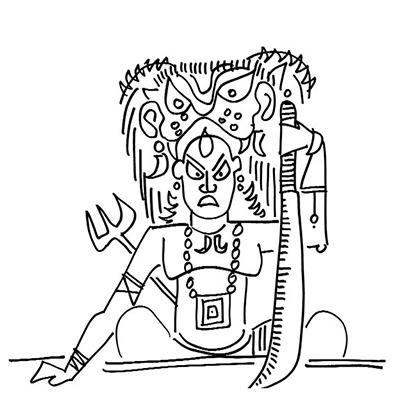 Evangelism, Crusades and Inquisition are three terms that come to us from Christian history. Evangelism comes from the earliest phase of Christianity, and refers to ‘the act of spreading the good word’ used by Christ’s followers to convert Greeks and Romans to their belief system based on the myths of God, Sin, Prophecy, Saviour and Redemption. This began 2,000 years ago. It eventually consolidated the Roman Empire by transforming it into the Holy Roman Empire 1,500 years ago.

Crusades refers to ‘the campaign of those bearing the mark of the Cross’ against Muslims who had laid claim to the Holy City of Jerusalem. The battle began nearly 1,000 years ago and lasted for centuries. A common enemy and common cause helped unite the Eastern and Western halves of the Holy Roman Empire, but eventually failed both in reclaiming the holy land and in sustaining unity.

Inquisition refers to ‘prolonged questioning to identify and punish the heretic and the blasphemer’. This activity was meant to identify Protestants, who, inspired by the rising tide of science and logic, threatened the already fragmented Holy Roman Empire by questioning the authority of the Pope, and challenging prevalent notions of God. This activity peaked 500 years ago. It did not work. Europe was forever divided between Catholics and Protestants. This division spread beyond the Pacific with South America dominated by Catholics and North America dominated by Protestants.

Evangelism, Crusades and Inquisition can be found in Islamic history too, though the words used are different: Da’wah, Jihad, Mihna. As in Christianity, it did not stop people from leaving the faith, becoming atheists, or creating new sects and schools of thought, accounting for the diverse forms of Islam we find around the world.

Many followers of Hindutva, exasperated by the unorganised nature of Hinduism, are trying to recast Hinduism using this three-pronged model of organised political religions. But it faces many hurdles.

When you wish to convert people to Hinduism, as many Hindu ‘missions’ do, what does it actually mean? Does it mean practicing yoga, or does it mean having a jati (caste), or does it mean becoming a hermit (sanyasi) or maybe even a brahmin, an option given by many gurus to their white disciples? So now Hindutva Evangelism simply involves demanding hyper-nationalist behaviour, which includes adoration of Bharat Mata, India turned into a goddess, or forcing everyone to adopt Hindi, something that can be enforced and monitored.

Hindutva Crusades are relatively easier. Holy War (Dharma-yuddha) has been declared against Muslims and Christians and Communists through various policy decisions such as the beef ban and questioning freedom of speech. Hindutva Inquisition against insiders means identifying and hounding those who do not endorse Hindutva claims about Hinduism. For example, you are anti-Hindu heretic, hence anti-national blasphemer, if you do not accept that India was a great civilisation 10,000 years ago with knowledge of aeroplanes and plastic surgery, scientific evidence notwithstanding.

Some may argue this counterforce is needed to balance the force of smug anti-Hindu secularism. But, at its heart, this political exercise reveals a deep discomfort with the foundations of the Hindu worldview based on fluidity and diversity that resists any rigid organisation, where kings come and go, doctrines come and go, religions come and go, like waves on the stormy ocean of milk, but Vishnu always smiles and Shiva dances. All we can do is watch and witness the Age of Anger with two key words inscribed on doors of a Sai Baba temple: shraddha (faith) and saburi (patience).