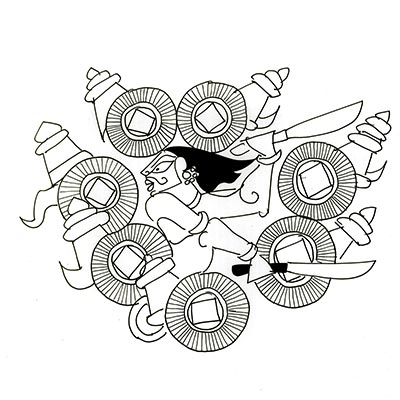 Everybody loves the story of Abhimanyu in the Mahabharata. This son of Arjuna and Subhadra was a young lad who knew how to enter a battle formation called Chakravyuha but did not know how to get out, yet he plunged himself into war to save his family, and in the process got himself killed.

The corporate world is full of seductive Charavyuhas that enchant and entrap ill-prepared but valorous and impressionable Abhimanyus. We find ambitious young men with little skills believing they can solve any problem in the world and then finding themselves in tricky situation they cannot escape from. While the company, which has bet on them, cannot let them go despite recognizing their shortcomings, the Abhimanyus find themselves choked because they bit off more than they could chew, unable to cry out for help.

In a folktale, when Arjuna blames his incompetent brothers and his vile enemies for the death of his son, Krishna says, “Perhaps you should consider blaming yourself too. You always admired brave heroes who dared to do the impossible. Your son wanted to be the hero that you would forever admired, even if it meant taking foolhardy risks. And now he is a great hero you can admire. But he is also a dead hero.”

This coming from Krishna is significant as Krishna is called Ran-chod-rai, he who ran away from the battlefield. The story from the Bhagavat Purana goes that when it was clear that Jarasandha’s general, Kal-yavan, would burn down the city of Mathura, Krishna simply gave Kal-yavan the slip and ran away to distant Dwarka. He returned only after he had befriended the Pandavas and was able to defeat Jarasandha using trickery rather then strength. The temple of Ran-chod-rai is located in Dwarka and Dakor in Gujarat and is ironically patronized by Rajputs or warrior communities popular for preferring death to dishonour. It is also popular amongst Banias or trading communities who are often told by their elders, “To succeed in the marketplace, leave your nose (symbol of ego) behind at home.”

In the corporate world, we often glamorize high risks and hard work. So people work crazy schedules doing ridiculous tasks. Sales guys chase unbelievable targets, way above market growth, and believe that by staying in the office late at night they will solve the problem. Marketing guys spend hours going over strategies, editing them endlessly, preparing charts after charts, trying hard to mask their confusion and cluelessness.
Often people start assuming that ignoring family life will somehow make them successful, as they will be rewarded for this ‘sacrifice’. Those who work odd hours refuse to sleep or eat or rest, become heroes in the workplace. They are seen as displayers of true integrity. Anyone who is smart and organised, who balances work and life, is seen as selfish, cunning and not committed to the task at hand. This is especially seen in jobs related to strategy, creativity, and marketing, where the endpoint is not clearly measurable, people compensate and justify their salary by overworking, by creating problems and investing time and resources at solving them. We live in a world where bards sing about Abhimanyus who die young not Ran-chod-rais who live to fight another day.

The thing is business is uncertain but shareholders demand certainty. We plan, we strategise, but the market constantly takes us by surprise. Our assumptions turn out to be wrong. Our risks do not always work out. This creates stress as the world only values winners. We try to increase the probability of victory through overwork and even foolhardy work. We are afraid to leave the battlefield and come back refreshed the next day. We bravely put ourselves in situations and find ourselves ill-equipped to handle the tasks at hand. We overestimate ourselves and underestimate the problem that needs to be solved. We are too proud to admit mistakes or shortcomings. We always have hope — things may just work out. And so we continue, entrapped by valour and glamour, even when chances of success look bleak.