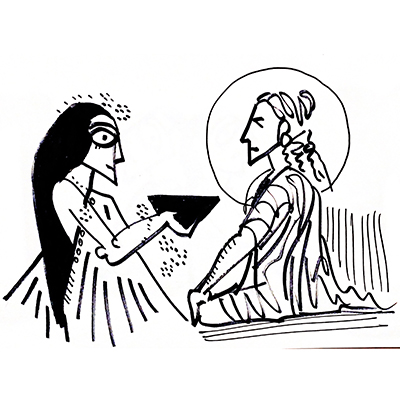 Fasting is a very important spiritual practice. It is about denying the body the pleasure it seeks. It is supposed to earn merit and help us rise up in the karmic ladder. This thesis is an essential part of Buddhism, Jainism and Hinduism. And so, in all three traditions, there are many stories related to fasting, and to breaking the fast. For example, in his initial search to find the answer to life’s suffering, Siddhartha Gautama was advised by monks to fast. While fasting, he became so weak that he could barely walk. At this time, a woman called Sujata fed him rice cooked in milk, and nourished him to health. This made him realise that extreme torture of the body does not lead to enlightenment.

Later, when he achieved enlightenment, Buddha was given food by two travelling merchants. They had been stopped on their path by a celestial being, who revealed that by serving the Buddha food, the merchants would attain merit, which would bring them prosperity in life. These two merchants fed the Buddha and received his hair from him; using this hair, they built Stupas. One of the merchants then spread Buddhism to the northern part of the world: to Gandhara and the bulk region. The second took it to the southern region: to Amravati, Sri Lanka, and Burma.

Similar stories are found in the Jain tradition. In the Jain tradition, the first Tirthankara of the current world cycle or kalpa, Rishabhnath, broke his fast on Akshay Tritiya day. He drank sugarcane juice given to him by King Shreya. Sugarcane is considered very auspicious. India is supposed to be the land where sugarcane was first cultivated. This is why the oldest kings of India, like Rishabnath and Ram were identified as bringers of sugarcane or Ishkavaku. The word Akshaya may be linked to Ikshu, or sugarcane. Iskhu Tritiya may have become Akshaya Tritiya over time.

The twenty-fourth Tirthankara of the current cycle, Mahavir, also has a very interesting story related to the breaking of his fast. He swore that he would not eat, until he was fed diluted lentils by a weeping princess, whose hair had been shaved off her head and who had chains around her feet. That is exactly what happened. A princess called Chandrabala had been abducted and sold into slavery to a merchant household. Her hair was shaved to make her look ugly.

She offered the lentil given to her to Mahavir. She felt that by feeding a monk she would earn merit and her misfortune would come to an end.

In the Mahabharata folklore, we hear of Draupadi accidentally plucking a fruit reserved for a sage for breaking his fast, who had been fasting for fourteen years. Fearing she would be cursed, she tries to reattach the fruit to a tree. The only way she can do so is by revealing a truth that is unknown to any other. In the folk narratives, it is said that she reveals her secret love for Karna which allows the fruit to rejoin the branch of the tree. Before we judge Draupadi, we must eat the fruit she reattached to the tree. It is the jamun. If it colours your tongue purple, it means you too have a secret to hide.