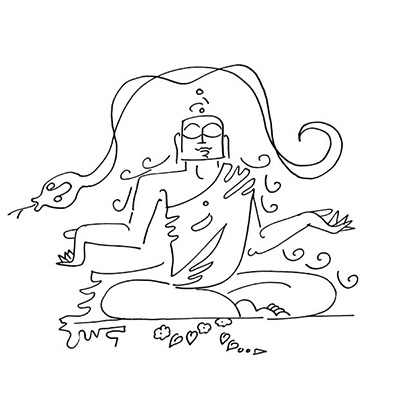 ‘A WISE man is calm in fortune and misfortune. He does not separate good times and bad times. He lets go of sukkha, the feeling of joy, and dukkha, the feeling of sorrow.’ These lines on equanimity (sthithapragnya) attributed to various sages is often spoken in times of sorrow, when there is a death in the family, when exam results are not quite what we hoped for, when we don’t get that job or that admission. But we rarely mouth these in times of joy, when there is a birth in the family, when we get the results, job and admission we want. These are lines to be spoken at a divorce, not at a marriage.

The spiritual side of religion has always been used as a coping skill, to be used in times of suffering. The occult side of religion – rituals that seek to influence the future – has simultaneously been used to ensure that we get what we want. So, people flock to astrologers and geomancers who become the refuge of the aspirational, of all those who find that logic, hard work and merit don’t seem to be taking them far. In fact, many sages double up as sorcerers. Gurus are not just people with wise comforting words; they also have ‘aura’ and ‘power’ and ‘radiation’.

With the rise of scientific thinking, and material philosophies like Capitalism and Communism, the educated man was expected to reject religion, spirituality and occult, in pursuit of the rational. So what does a failure, a person in bad times, without money and power, do? The atheist-scientist-rationalist warns him against chasing fantasies such as God, manipulative words of sages, and tricks of occultists. All you are allowed to do is work hard, and fight, for what you want. Revolt. Never pray.

But, what do we do when revolutions fail and we grow tired of martyrs, and desires don’t wane, and frustration festers? Do we go back to the wise words of the sages? Do we listen to the oracles and augurs?

Life does not take a predictable course. Just as nature is not as predictable as we would want it to be. Yes, summer follows winters, but we cannot predict how hot this summer will be or how cold this winter will be. And, we cannot predict those forest fires and thunderstorms. We have to live with uncertainty. Rationality cannot give solace to the fear that rises when things get unpredictable. You need the soothing balm of the sage, the opium of religion, the apparitions of the sorcerers. The mystical music makes mundane tragedies bearable.

We thought nation states and democratically elected governments will create a world of rational leaders. We find ourselves surrounded by alpha-male-leaders who use rhetoric, more than content, to acquire power. We have not been able to tame the world with science. We have to submit helplessly to the unpredictable waves of fortune and misfortune as leaders fail and martyrs become bores.

All our knowledge (gyana) and effort (karma) needs to be balanced with faith (bhakti). The West will see these times we live in as the End of Enlightenment. The Jains will say it is avasarpini, the downward move of the serpent of time, before the upswing. Hindus will say it is a wave: what goes down, comes up, and vice versa. Just have faith (shraddha) and patience (saburi). Fortune will eventually come. As does misfortune.