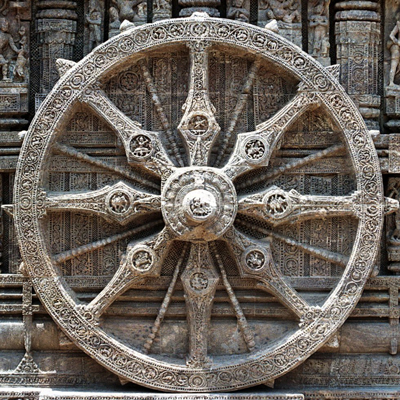 A king wanted the perfect groom for his daughter. So he travelled to the abode of the gods to find out who was the perfect man ever created. When he returned with the information, the world had changed dramatically: a hundred years had passed, his daughter and his entire family had died and no one remembered him. He was told that time flows faster in the realm of the gods, what is a day there is a hundred years on earth.

In another story, the gods asked a hermit to fetch them a pot of water. As the hermit dipped the pot in the water, he saw a beautiful girl and fell in love with her and asked her to marry him. She agreed then and there and so the hermit became a householder and had children by the woman, and the children had children of their own. In his old age, there was suddenly a great flood. The river broke its banks and washed away everything: his home, his children, his grandchildren, even his wife. He was left alone, without anything, when suddenly he heard the gods shout, “Please pull the pot out and give us the water!” The hermit realized he was dreaming while dipping the pot in the water.

In the first story, what seems like a day turn out to be a lifetime while in the second story, what seems like a lifetime turns out to be a second. In the former, time contracts. In the latter, time expands. This is a common theme in Hindu mythology. What makes time change qualitatively is attention. When you are concentrating, time contracts. When you are not concentrating,time expands.

Nikhilesh loves working with Mark. Mark has the ability to turn every project into a game with so much fun that everyone comes early to work, leaves late, no one feels tired. Time passes so quickly and weekends feel boring and terrible. Nikhilesh does not speak of work-life balance. Work is life and life is work. His wife enjoys seeing Nikhilesh this way as he brings the energy and joy of work back home to the delight of everybody.

Nikhilesh had a very different experience when he worked with Dinakar. Dinakar was no fun. Every meeting was a drag. Everybody had to fill in long reports and long forms. Everything was read and discussed but no one really paid attention. Every minute of the meeting was documented and filed and circulated. It was torture to go to work and joy to return home. But the boredom and irritable mood at office travelled home and Nikhilesh would often snap at his wife.