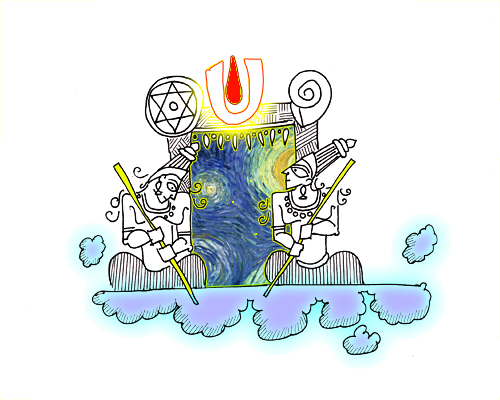 If Vishnu is the CEO, then his office is Vaikuntha, the ultimate paradise, a place where his every word is law and every wish a command. What cannot be resolved elsewhere can only be resolved in Vaikuntha. Naturally everybody wants to go to Vaikuntha. Outsiders, from vendors to consumers, even kings of other kingdoms, who wish to explore opportunities, make alliances, settle disputes and manage threats.

Insiders, from managers to executives to trainees, when they feel the king’s courtiers are ill-equipped to resolve their problems or when they feel the ministers are not telling the king the truth. Vishnu welcomes all. At least he intends to.

A sage called Bhrigu once made a trip of the heavens to find out who is the greatest of all the Gods. Brahma was so busy creating the world that he did not bother to welcome Bhrigu. Shiva, with his eyes shut, was totally withdrawn and indifferent to Bhrigu’s presence. Both were cursed by Bhrigu. Vishnu, busy managing the affairs of the world, at first did not notice Bhrigu but then apologized profusely, falling at his feet. For a visitor to Vaikuntha is God to God.

Indra, king of the Devas, once made the mistake of ignoring a visitor whose name was Durvasa. As a result he was cursed — Lakshmi was forced to leave his side. Indra’s paradise, was stripped of its splendour. The trees did not blossom or bear fruit. Cows did not give milk. Gandharvas were unable to make music. A reminder of the consequences of ignoring a visitor. For it is the people who seek the king — be it outsiders or insiders — who make the kingdom valuable.

But even if he wishes otherwise, a leader just cannot make time for everybody. He, like the rest of us, has 24 hours in a day and that time has to be rationed well between his personal life and his public role. In Mughal times, the king had two courts: the Diwan-e-khas for his executive council through whom he managed the kingdom and a more general open Diwan-e-aam for the public, when everyone could meet him and where issues that his executive council could not resolve were addressed.

It was in these times that great value was given to the position of the doorkeeper. Seated in the gatehouse, at the entrance of the king’s citadel, it was his job to limit access to the king and filter out the undesirables. In time, these doorkeepers came to have a mythology of their own.

In a Shiva temple, for example, one is advised to acknowledge Nandi, the bull who sits before the deity, with a touch, or maybe an offering of flowers, and only then enter the main shrine. “Be in Nandi’s good books,” one is told, “Since he is always with Shiva, Shiva listens to whatever Nandi has to say.”

If one looks carefully though at the images of Jaya and Vijaya in a traditional Vaishnava temple such as the temple of Tirupati Balaji in Andhra Pradesh, one will notice that while they look like Vishnu, holding a conch-shell and a discus, and a mace, they usually do not hold a lotus. And they sport fangs like dogs or serpents. Thus the doorkeepers, while apparently like Vishnu, are not as welcoming — they are stern, keeping the unworthy out.

In fact they were convinced that the two were humouring the four of them. Annoyed, they cursed the doorkeepers that they would lose their exalted position and be reborn on earth as much hated demons known as Hiranayaksha and Hiranakashipu. The demon-like fangs of Jaya and Vijaya, say artisans, are a reminder of how scary they appeared to the boy-sages.

It is best that an aspiring leader keep in mind that he has many Jayas and Vijayas of his own — from the gatekeeper who lets in the cars to the receptionist in the lobby who shows in the guests to the secretary in the outer office who checks the appointments to the executive assistant who churns out all the key documents just before the meeting to the admin-boy who serves tea to guests.

Each one of them has the power to make an impression about the CEO depending on how they treat a visitor. An MNC may talk highly about respecting human values but a rude remark from the gatekeeper or a cold stare from the secretary and the impression about the CEO, however grand and generous he may be, crumbles instantly. These reactions can make or break the meeting that is to follow.

One CEO visiting another CEO was so annoyed because the gatekeeper insisted he get off his car and sign the muster book that he turned around and signed the deal with another company. Another visitor was forced to call the CEO himself when his driver got into an argument with the security at the gate. The CEO was unable to help because the security rules came from the US (it was an American MNC and incident took place shortly after 9/11) and he would be pulled up if he interfered in the matter.

We live in times of tightened security. Nothing is worse than entering a meeting room after feeling one has been violated. But with a little training security personnel can be taught how to do their job without disrespecting incoming people, howsoever brusque they may seem.

In some offices, one is made to sit in a waiting room and wait till you are fetched by the person who one has come to meet. That is all very fine. But the room often does not have enough chairs or a water fountain or a toilet close-by. No pleasant images to see or interesting reading material on the table. This can be quite disconcerting — especially when the waiting is prolonged.

Matters become worse when the secretary raises her head and rudely asks, “Who are you?” There was a time when secretaries were trained to treat visitors as guests. A smile helped. Followed by clarifications of identity and purpose. Then being led to a seat or a meeting room, followed by a glass of water, (very important in a hot country like India especially). Much better than being pointed to the water cooler. It helps if tea or coffee is served — not in a disposable coffee cup but in crockery worthy of the leader’s status.

This may all seem very colonial. In Pax Americana, these things may not matter. There may be no secretary or doorkeeper. You can simply walk into a CEO’s office who just might be wearing shorts throwing a ball through hoops while discussing a billion dollar deal. But they do matter in India where Atithi Devoh Bhavah — a guest is like God. The way a visitor is treated tells one how a leader values his people.

The Sanat-kumars perhaps did not come by prior appointment. But Vishnu with his arms spread out perhaps gave the impression that everyone was welcome to Vaikuntha anytime. This instruction was perhaps not given to Jaya and Vijaya. Or perhaps the timing was all wrong. Vishnu was asleep or on a cosmic assignment, unavailable, and the doorkeepers were perhaps only doing their job when they said, “Come later,” but viewed from the point-of-view of the boy-sages , they were being demonic.

The next time you visit your office — check out the Jaya and Vijayas who stand between you and your visitors and make sure they don’t have fangs. On earth, in Kali-yuga, the curse of the boy-sages may fall not on the doorkeepers but directly on the leader within Vaikuntha.