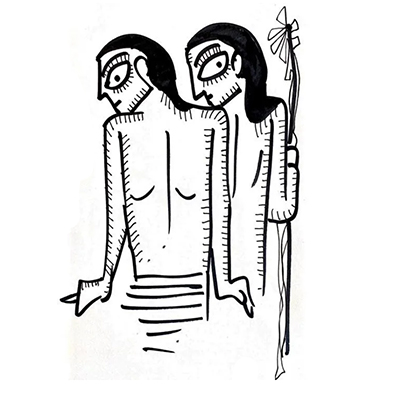 Once, an old man promised a fellow traveller, a young man, his daughter’s hand in marriage. Days later, when the young man actually showed up at the village, the old man refused saying he promised no such thing. Bring a witness, demanded the old man. The young man, remembering that there was a Krishna temple near where the old man promised him his daughter, goes to the temple and innocently asks Krishna to come and be his witness. Krishna agrees on one condition, “Don’t ever turn around to confirm, if I am following you or not. Just believe that I am behind you!” Then, exactly as one would expect, while they are walking, Krishna behind the young man, the anklets of Krishna stop making a noise because they were travelling through soft mud. The young man in fear turns around, and it is at that moment that Krishna turns to stone. This is the story of Sakshi Gopal (witness Krishna) temple of Odisha.

The Bible tells the story of Lot, who is told by angels, not to turn around when leaving the city of Sodom of Gomorrah that God plans to destroy with fire and brimstone. But Lot’s wife turns around and turns into a pillar of salt.

These stories are as much about trust as they are about looking back at the past and losing sight of the future. We live in a society where social justice warriors and politicians keep looking at the past and use that to rile up crowds and promise vengeance in the future. Life is thus burdened by the past and unable to move forward. We get fixed, like a rock or a pillar of salt, stuck to what happened before.