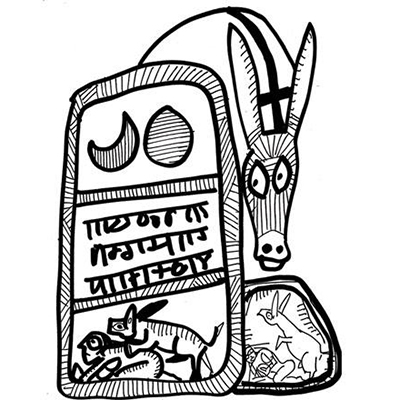 In many parts of India, especially in Maharashtra and Goa, one finds stone tablets showing a strange image of a donkey having sex with a woman. Known as “gadhe-gal” or “donkey-curse”, archaeologists believe these stones are 1,000-year-old land grants, carved in stone. They were probably carved by Shilahara kings and given to Brahmins, who migrated to the region then. They were placed at the boundaries of farms, to mark territory.

These steles show the sun and moon, indicating that the agricultural land has been given away until for as long as the sun and moon exist, i.e. until eternity. The image of a donkey copulating with a woman is a warning, a curse, or threat, to those who violate the land grant. If someone encroaches the land, then a donkey shall be made to copulate with the violator’s wife or the woman of his house.

Some people have read this as a metaphor where the woman represents the earth and the donkey, the plough. The “donkey” plough, unlike the “ox” plough, will plunder the stolen land, and render it barren. There is one Harappan seal showing a bull copulating with a woman and has been linked to this donkey image, though the images are separated by 3,000 years and 1,000 miles.

Donkeys do not play a great role in Indian mythology. We find them being the vahan, or mount, of the goddess Shitala. She is associated with smallpox, measles, viral fevers and other such diseases. The donkey is also associated with the fierce goddess, Kala Ratri. Both are fringe goddesses—to be feared and appeased.

In Greek mythology, the donkey is associated with Bacchus, who is the god of wine, parties and disorder. It is associated with his followers, the satyrs, who have goat-legs and who wine and revelry. Once, Bacchus gave donkey ears to King Midas, who judged a musical competition and gave a judgement that upset his satyrs.

Donkeys played an important role in the Old Testament. There is a story of how a man called Balaam tried to curse the Israelites. He was travelling on a donkey and his path was blocked by an angel. He couldn’t see the angel, but the donkey could and refused to move forward. Balaam kept hitting the donkey until the donkey spoke and warned him of the angel in his path. This is one of the rare instances where an animal speaks in the Old Testament.

The concept of the Messiah’s donkey is also popular in the New Testament. Donkeys were present in the barn where Jesus was born. On Palm Sunday, on the week of his crucifixion, Jesus entered Jerusalem on a humble donkey, much against the popular idea of what a Messiah would ride—a virile flamboyant stallion perhaps. The donkey was witness to the crucifixion and the shadow of the cross made a mark on his back, seen till today.

The Messiah’s donkey also has a controversial meaning in Zionist politics in Israel. It is believed that donkeys are the people who will represent the secular lobby of the Jewish State. The Messiah represents the religious lobby, that will ultimately gain control of the state.