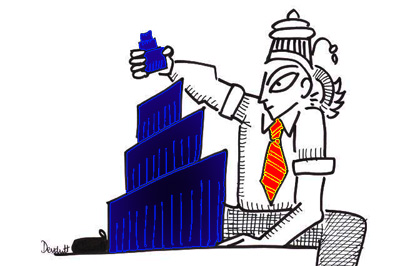 Long ago there was a Chakravarti; his kingdom stretched to the horizon. He was the ruler of twelve nations. And people of these different nations spoke different languages. The Chakravarti was growing old so one day he called his two sons. He said, “I am the ruler of twelve nations and my people speak in twelve languages and many more dialects. Therefore they often fight with each other and do not understand each other. How should we remedy this ?” One son said, “Let us impose upon them a single language so that all of them speak the same language and understand each other. That will surely bring peace.” The other son said, “I disagree, I will not impose a single language upon them. I shall instead learn all twelve languages, so that I can understand all the twelve people and settle the disputes between them and that way all twelve will look upon me as the great king. That way also each nation will retain its own identity and will be very different from the other.” The king smiled and said to the second son, “You shall be my heir because your kingdom shall last longer.”

Many organizations, however, believe that a common language is the most powerful binding force. It helps people think the same way, act the same way. With alignment comes efficiency.

Prashant is doing the same thing with his Zonal Offices. When Prashant took over as the head of the India arm of this Content Development Organization, he asked for reports from the four Zonal Offices. He wanted to know the content output per writer, as well as the key performance indicators of content development. The four reports came in four different formats, each of the Zonal directors adding his view point and thoughts along in the attached letter. Prashant found this disturbing; it took a long time for him to decipher what each one was saying and to compare and contrast the four zones. He yearned for alignment and the first thing he did therefore was to create a template which he sent across to four zones. “Henceforth,” he said, “The reports must come in this template.” The exasperation he felt with his Spanish Central Office, he has now passed on to his Zonal Offices without realizing it.

Soon there were more templates being sent from Prashant to the Zonal Offices. There were Standard Operation Processes on how data should be collected, on how local weekly activities have to be measured, on how human resources have to be tracked, on how markets have to be scanned. In the end it seemed that all thinking happened only at Head Office and no thinking was allowed in the Zonal Office. Zonal offices existed only to execute, follow procedures and fill templates.

But this was not Prashant’s intention. All he wanted was efficiency and he felt a common language across the zones helped. Like his Central Office, Prashant did not realize that languages evolve to satisfy a particular need. The language of the Central Office manifesting as a Global Template is a response to the needs of the Central Office. Likewise language of a India Head Office manifesting as a National Template also satisfies national not zonal needs and hence are useful in solving global not local issues. They restrain and restrict people downstream, especially those who are in touch with the market and serve only decision-making abilities upstream.

One must always remember that the word ‘God’ cannot be written in Chinese and the word ‘evil’ cannot be translated into any Indian language, because different people saw the world differently and so developed different languages to communicate what they saw. There is no common understanding of the world and hence no common language.

The false sense of order and homogeneity resulting from a common global language or template is perhaps best expressed in the Bible in the story of the Tower of Babel. After the Great Flood, people came to be ruled by one King Nimrod. Everyone spoke a single language. King Nimrod decided to give his subjects a single goal — building a tower so immense that it’s top would reach the skies. This was the tower of Babel and it demonstrated the greatness of man and it made Nimrod truly feel he was master over all that he surveyed and all of humanity bowed to him. Dismayed at the vanity and stupidity of Nimrod, God twisted the tongues of all his subjects causing people to speak the different languages. This led to confusion at first. Then people who spoke the same language formed groups and separated from each other. Thus the various nations of the world came into being, thinking differently, speaking differently, often quarreling with each other.

In our quest to stop confusion and misunderstanding, to make people align and be more efficient, we seek to create a common language. But this uniformity of thinking spells doom for an organization because it ends up controlling, hence limiting, thoughts and ideas. A single language goes against the very notion of diversity and diversity is necessary for survival.

Perhaps a balance is required between a central common language and diversity of the local languages so that needs of the Central Office in Spain, the Head Office in India and all the four zones are satisfied. And a good leader has to find a means of balancing it all.