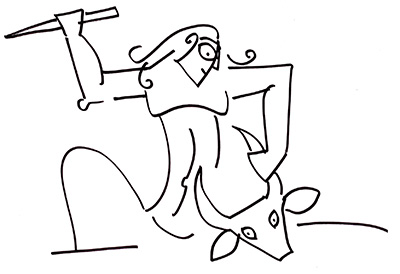 One day, in the same newspaper I read two news items. One spoke of how technology is being used to ensure members of a particular religious group visit places of worship at regular intervals as prescribed by the scriptures. One spoke of how a European country is now using measurement to check if there is adequate gender sensitivity in a film. It got me thinking.

Both use the same means — rules and measurement to shape human behaviour. One uses it for religious reasons. One uses for secular/social reasons. And yet, we are conditioned to mock the religious activity and not the secular activity. Why? Are we saying the ends justify the means? So if the end is secular, coercion using rules and measurement is good, but if the end is religious, then such coercion is wrong. Why so?

I remember a serial on DD television where the mother goes on fast because the son wants to marry a widow. The technique she uses is the same used by Gandhi to stop riots. In the former, fasting is used to block social reform. In the other, fasting is used stop social madness. Who is right in this case? Who determines what end, what goal, is right, appropriate or good? Every person who fasts, every person who institutes rules and regulations, is convinced his or her goal is right. But the person who feels victimized by the fast, the rules and the regulation may not think so.

In Hindu mythology, he who imposes rules on others is visualized as Daksha Prajapati, patron of the yagna, who controls everyone around him: his daughters, and his sons-in-laws, the devatas. He despises Shiva who is indifferent to rules. Clash between Shiva and Daksha is inevitable. But while we may glamorize Shiva, we forget that it is Daksha who is Prajapati, the lord who creates society, civilization and culture. His rules may be unfair, or extreme, but he establishes some order, which is why when Shiva beheads him, the gods beg Shiva to restore him to life. Shiva does so with a goat’s head. Why goat’s head? Why not human’s head? A reminder that rules are nothing but methods of domesticating the human-animal?

I find all institutions function like Daksha — whether they are secular or religious. Through rules they force everyone to behave in a particular way, that they deem to be good. It is akin to domesticating farm animals so that they are obedient and productive. And that is good — for the farmer!

But humans are not oxen or horses or dogs. We think. We love rules when we follow them voluntarily. When imposed involuntarily, we resist, but ultimately submit, as submission grants rewards and recognition (carrot) and keeps away retribution (stick).

The assumption in many institutions is that obedience is good. So children who go to the place of worship as prescribed by the scriptures are good. So filmmakers who show stories without gender bias are good. But such affected behaviour cannot be deemed genuine or authentic. We want a society where everyone is genuine and authentic and rule-following. An ideal society. But such a society we will also find boring. Excitement comes from the thrill, the breaking of rules, the subversion, the revolution. We are not supposed to jump off building, but to do so (with a harness) is all what bungee jumping is all about.