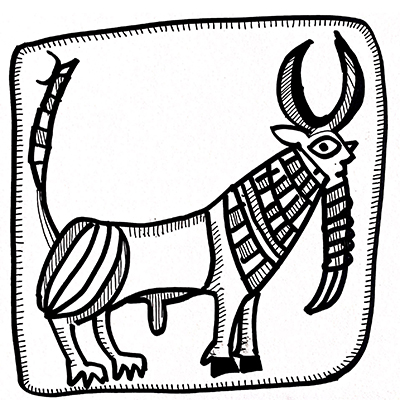 Animals have a close relationship with human corporations and guilds. Nearly 4500 years ago, in the Harappan cities of Northwestern India, archeologists have found hundreds of soft stone seals, barely an inch or two long in width that have animal motifs. They are full of marks that have yet to be deciphered. However, it is fairly clear, these emoji-like markings played some role in regulating trade in the cities. Many of these seals have images of animals. Not just any animal. Only wild animals, such as the elephant, the rhinoceros, the tiger, the bison, the goat, the zebu bull, but never the cow. Wild, to indicate independence, clearly.

Sometimes there are fantastic creatures like the unicorn, a deer-like creature with one horn. Or merged animals with three heads, or a composite beast of multiple animals. It has been speculated that these belong to trade guilds who formed the oligarchy controlling the cities and the trade routes. Perhaps the merged animals indicate the merger of different oligarchies. And the fantastic unicorn represents a bureaucracy that owed allegiance to no particular “natural” guild but existed across guilds.

Harappan cities waned by 1900 BCE. Over a 1000 years later, in the Vedic Period, that thrived in the Gangetic plains, we find various clans and groups of people, once again identified using animal motifs. Only this time we have words rather than images. We hear, rather than see, these animals. We learn of Naga (serpents), Hasti (elephant), Suparna (bird), Riksha (bear), Vanara (Bear). These become elaborated in the Ramayana. These are clearly animal totems that were respected by tribes and will be used as indicators as their identity markers.

Perhaps just as animals of different species do not mate with each other, people belonging to these various animal totem tribal groups did not marry each other, which is why we find stories of tension when a serpent-woman (Naga) falls in love with a human with no affiliation to any animal totem. Krishna, for example, marries a bear-princess, Jambavati. Ravana’s son, Meghnad marries the Naga princess Sulochana, as does Arjuna who marries Ulupi.

Perhaps these stories remind us also of the animal instincts of human beings. Animals have territories, and establish pecking orders, to ensure survival of the fittest. Likewise, humans have properties with boundaries, and hierarchy. Even today, we describe the corporate world as dog-eat-dog world and rat race, equating humans with animals. We see leaders are alpha-predators feared by all or as queen-bees who demand absolute obedience. Companies do not like their employees leaving and joining rivals. It is seen as betrayal of the species. Business families prevent daughters and sons from marrying into non-business or rival business families, like animals controlling the genetic pool of their species.

But to break these boundaries is where humans become super humans. This breaking of boundaries was seen as the mixing of castes in the brahmanical orthodoxy and the collapse of civilization, when in fact, it represents the hallmark of civilization, because civilization is when you share what you have and mingle and merge with other ideas and expand what you already know. This conflict of creating a society without boundaries without hierarchies, through trade is always going to be challenged by the mindset that wants to create boundaries and hierarchies in order to dominate and terrorize the other. In ancient times, peace was established by marriage between rival clans. Through marriage, rival factions were united.

In Greek mythology, a monster is an animal that cannot be clearly identified. Chimera is a monster because it is part goat, part serpent and part lion. But in India, we have gods who are a mix of many animals. Pancha-mukhi Hanuman shows Hanuman with the face of a monkey, a lion, a hawk, a boar and a horse. Odia Ramayana speaks of Navagunjara, a composite of nine beasts: rooster, peacock, bull, deer, lion, tiger, elephant, serpent and human. A similar composite beast is found in the Harappan seals too. They probably are a reminder of ancient mergers and acquisitions of various tribes and guilds.

Religions, race, castes and nationalities are new forms of guilds and tribes designed to split humans into species that cannot mate and merge with each other. We see how people frown when there is inter-religious, inter-caste, inter-race, inter-country, inter-class marriages. In the business world, even in the technology world, we have hardwares and softwares that resist talking to each other. Travellers observe how we need ‘adaptors’ in different part of the world. For all talk of one world, one humanity, Americans use the MMDDYY to write a date while Europeans use DDMMYY, so we don’t know if 9/11 means September 11 or November 9.