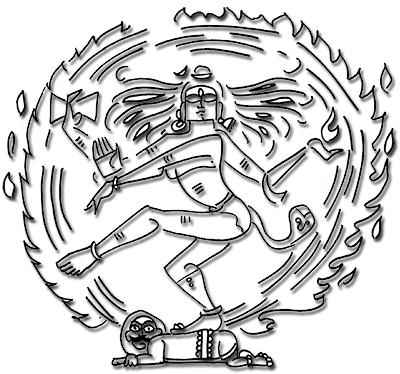 Many young people adore Shiva as a ‘cool dude’. Why? Because he is visualised as being indifferent to other people’s opinions regarding his appearance and lifestyle, and is content being alone, smoking his chillum, full of ganja (ganjika, in Sanskrit), a narcotic made using the flowers of the female cannabis plant, or drinking bhang, a milder narcotic drink made using the leaves of the male cannabis plant.

“If Shiva takes drugs, so must I,” said a student to his teacher. “A good idea,” said the teacher, “but first you must make yourself Shiva, no?” This leads us to the question, who is Shiva and why is he visualised as taking drugs. Are Hindu gods glamorizing drugs? Is that not what draws ‘hippies’ to India?

There is no denying that Shiva is associated with drugs. He smokes ganja. He drinks bhang. In many Tantrik schools, cannabis is said to be the mysterious Soma mentioned in the Vedas, an idea that is vociferously rejected by the Vedantic school that is more puritanical and mainstream.

In Shiva temples, he accepts the venomous and hallucinogenic flowers and fruit of dhatura. As Kal Bhairav, he receives alcohol as offering. Is that why the Puranas tell the story of how Daksha does not allow Shiva to enter his yagna-shala? Yet, Daksha’s daughter, Sati, who is the Goddess, chooses to walk out the yagna-shala and make this ‘impure’ god her husband. What is the mystery?

We can argue that drugs may be part of Shaiva culture but it is not part of Vaishnava culture. But that is not true. Bhang is an important part of rituals in Vishnu temples. It is offered in ‘government-approved’ shops in Puri, Odisha, as well as Nathdvara, Rajasthan, where Krishna is worshipped as Mahaprabhu Jagnnatha and Srinathji Thakur respectively. The bhang is offered to Krishna’s elder brother, Balarama. His image is bathed with it. Balarama is often identified with Shiva. His symbol is the toddy palm, whose sap is used to make a drink that is mildly alcoholic. What are the gods trying to communicate?

To understand this mystery, we have to appreciate how Hinduism divides the world into inside and outside, the home and the wilderness, the realm of the householder and the realm of the hermit. Shiva, like Balarama, is the reluctant householder. Both prefer the wilderness that is associated with cannabis and dhatura, and toddy palms. In this form, they are celibate. They withdraw from all sensory pleasure. The drugs are meant to withdraw. They are thus tools for yoga, not bhoga.

But for most people, drugs are about bhoga, pleasure. Unable to handle social responsibilities and social pressures, feeling pressured by the demands of modern society, feeling misunderstood, alone and unloved, many young people turn to drugs that help them escape from harsh reality and which help them construct a more compliant reality. This drug-taking is more a balm to ease the tensions of life, a crutch born of failure, or rather failure. None of these drug-takers want to be yogis.

Shiva is yogi. He withdraws. Simultaneously he participates, with the Goddess, engaging with the world as Shankara, bringing forth song and dance and stories, as well as a son called Murugan, who protects the world, and another son called Ganesha, who provides for the world. This dual aspect of withdrawal and engagement makes Shiva, Shiva. Until we can become this Shiva, who helps the world, and does not fear it, it is best to stay away from drugs.