Does Hindu Meal Include Dalit Food? 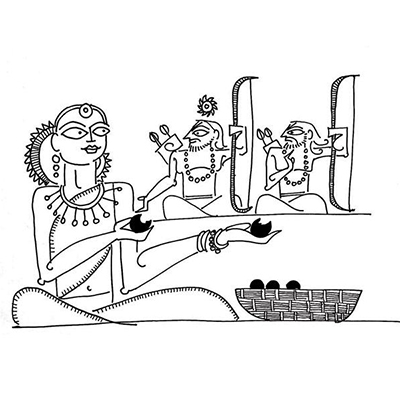 Have you been offered Hindu meals on flights? What is it? North Indian food, or South Indian? Does it include Dalit food? What is Dalit food?

The word “Dalit” homogenises hundreds of communities that are listed as Scheduled Castes and Scheduled Tribes. Some North Eastern restaurants do try to give us a taste of food eaten by North Eastern tribes, but as far as “lower caste” food is concerned, most Hindus have no clue about them.

I recently came across a book on Dalit food written by Shahu Patole. It draws attention to human creativity and ingenuity manifesting in matters related to food, amongst people who were deliberately marginalised. The book, written in Marathi, is titled Anna He Apurnabrahma. The title draws attention to the famous line, sung in most ashrams, where food (anna) is equated with God (brahman) and reminds us of how some food, hence God, is considered “impure” by those who deem themselves “pure”.

The book gives us a glimpse into Dalit food, at least that of his community. He speaks of how people involved in certain “dirty” vocations like scavenging, were forced to live outside the village, and forced to eat only dead animals: not animals which were slaughtered, but animals that had died due to sickness or old age. They also ate leftover food, sometimes distributed ritually after festivals, which was often fermented and kept to be consumed at a later date.

Songs of these communities that describe these foods are not easily found in mainstream literature. This contains a reference to organs such as epiglottis, windpipe, and omentum, that “upper” castes do not eat, and even find “foul”. He also refers to dishes made using coagulated blood. Incidentally, coagulated blood puddings are popular in European food and in many Anglo-Indian kitchens. Needless to say, food also includes beef, pork and rodents, food rejected by mainstream communities, even those that ate non-vegetarian food. Although pork is not prohibited to Hindus, and wild boar was often eaten by kings who hunted them, pork was seen as dirty and traditionally equated with the “outer, impure” communities of the caste hierarchy.

Some anthropologists and food historians have argued that Dalit cuisine has emerged only after they stopped eating dead and leftover food, i.e. when they chose to prepare food for themselves from slaughtered animals. The food is usually simple as they did not have the luxury of making elaborate cuisine. It contains limited spices and is extremely pungent. It intends to fill the belly rather than indulge the taste buds.

Even in the 21st Century, spiritual organisations promote the idea of hierarchy within food, based on purity. Thus, vegetarian food cooked with ghee without onion and garlic and even spices, are privileged as “satvic” food and so Brahmin. Then comes “rajasic” food of kings-oily, spicy, meaty.

And the rest is “tamasic” food-old and leftover, to be avoided by the “upper” castes, and so available only to “lower” castes. Ritually, leftover food or “ucchistha” (jhoota) food, contaminated by saliva, is not offered to guests, but can be offered to Dalits, who work in sewers and are involved in sweeping and scavenging. Perhaps to challenge this caste hierarchy, Lord Ram accepted Sabari’s jhoota ber, the leftover food of a tribal (can we say Dalit) woman.