Do you know why I stamped the snake Kaliya 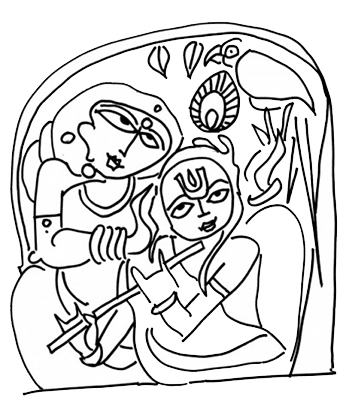 These words written in Telugu narrated to Radha, attributed to Krishna, are part of a collection called Radhika Santvanamu (appeasement of Radha) in the 18th century by one Muddupalani, granddaughter of Tanjanayaki, an extremely talented courtesan (devadasi or ganika) belonging to the illustrious Tanjavur court of the Maratha King Pratapsingh.

They were republished in the early 20th century by another illustrious courtesan, Bangalore Nagaratnamma, founder of the now famous Carnatic music festival in honor of the musician-saint Tyagaraja. Her edition was banned for the explicit sexual content, especially since they were written by women deemed ‘loose of character’ by the men of that time.  Editions that contained non-erotic devotional and love poetry were preferred.

And yet works on the story of Radha and Krishna have always been a combination of love, romance, devotion and clandestine eroticism. The story that Muddupallani narrates is very different from what most people in the Gangetic plains are familiar with.

In this collection of songs, Radha, now middle-aged, prepares her niece Ila-devi, to be Krishna’s bride and even gives her erotic advise. She even advises Krishna on how to be gentle with a young virgin. She is clearly the more experienced one. While Ila and Krishna are together, Radha pines for her beloved who she knows will soon forget her in favor of a younger woman. This pain of separation is made worse by betrayal. A parrot informs her of how Ila is trying to make Krishna forget Radha. Radha is heartbroken, feels abandoned and cast aside. But Krishna returns to Radha and appeases her, declaring that he loves her and only her truly.

These poems give insights into the inner workings of the women’s section of a royal household. Perhaps through the triad of Krishna, Ila and Radha, the poet was describing the relationship between the king, herself and her grandmother, who continued to be the royal favorite, her advanced age, not withstanding. We will never know.

Ever since the writing of Jayadeva’s Gita Govinda in the 12th century, there have been debates on the relationship of Radha and Krishna. There were two major schools: the svakiya, which believes Radha is the wife of Krishna and the parkiya, which believes that Radha is not his wife. The parkiya line of thought was often patronized by poets like Chandidas and Vidyapati who believed that love, that was unbound by law or custom or convention was true love. Hence songs constantly allude to Radha being married to someone else as she steps out of the house to meet Krishna in secret.

While the more suggestive schools became part of the mainstream, eventually stripping Radha-Krishna songs of all clandestine eroticism, the more explicit schools became part of underground and peripheral movements like Baul and Sahajiya which held Radha in high esteem for her independence. Like Krishna, who  is tied to Radha outside marriage and Rukmini inside marriage, they saw Radha as a Goddess who is tied to Krishna outside marriage and to Ayana (name varies in various writings) inside marriage. Here, marriage can be seen literally, and this can rankle our puritanical spirit. Or it can be seen as a metaphor for social mores that compel us to behave in a particular way and prevent us from being spontaneous and true to our inner spirit.

Every devotee has a choice of how he wants to see Radha: as Muddupalani did, as the svaykiyas do, as the parakiyas do or as the Sahajiyas do. It says nothing about Radha, but more about our attitude towards life and society.