Do Vedas Permit a Man to Marry a Man? 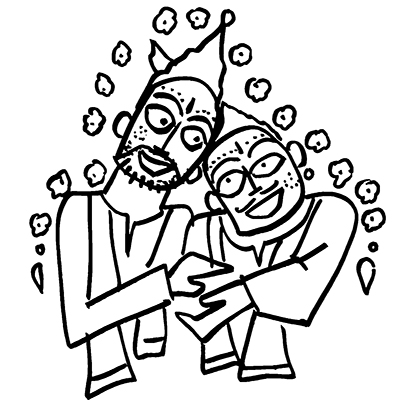 The world’s oldest wedding hymn is found in the Rig Veda. A thousand year later, dharma-shastra speaks of eight ways in which a man can marry a woman. One of them, not approved but accepted, is rape (pisacha vivaha). This is not acceptable legally today, but marriage continues to be an important theme in Hinduism as it transforms the student (brahmachari) into a householder (grihasthi), who has the right to inherit wealth, and is obliged to generate and distribute wealth. Of course, these laws were for the elite. They were not obligatory for those without power, status or property, revealing marriage is a cultural idea, not a natural one, and related to inheritance of power, status and property. At the same time, clinging to property is seen as the root of all problems, as we learn in the Mahabharata, fraught with the complexities of who is family, who should inherit and with whom it should be shared.

Animals and plants do not marry. In the Mahabharata, Kunti tells Pandu of a time before marriage when men and women just met each other for pleasure and children belonged to no one. Is she referring to pre-agricultural societies? Anthropologists trace the origin of marriage, and patriarchy, to the rise of agriculture, and the idea of property. When you own property, you want that property to go to your children. Women know the children they bear. But even they cannot be sure who is the father if they have had many simultaneous sex-partners. So to ensure one knows the father of a child, a woman is restricted to a single sex-partner. This is the origin of fidelity, stripped of all romantic layers. This was enforced by the belief that faithful women have magical powers. By venerating women who killed themselves with their husband’s funeral pyre, one ensured property rights stayed with the husband’s family.

Hindu mythology analyses marriage in detail. Shiva marries Shakti but does not understand the point of the marriage since he wants no children and has no property. Here, the aspect of companionship and taking care of other’s needs is highlighted. The Goddess wants Shiva to socialise, and so becomes a groom. In other words, Shiva needs no one, but the world needs Shiva. Kardama and Agastya do not want to marry but are told that he must produce children in order to repay the debt to their ancestors. So they marry only to be fathers, not husbands. There are stories of men who want children but cannot make their wives pregnant, like Vichitravirya and Pandu. In both cases, the wives are encouraged to have sex with other virile men, but the children born are called the children of the man who marries the woman. Thus fatherhood is separated from biology. The Puranas repeatedly refer to childless kings who adopt sons and daughters. Adoption is a common way to get a child, and so has nothing to do with marriage.

With these stories and ideas in mind, in the 21st century, as we challenge notions of religion, caste, and gender, we need to question the institution of marriage. Can a gay man who is romantically and sexually attracted to men marry a man? Can a lesbian woman who is romantically and sexually attracted to women marry a woman? Is marriage about biology or about lineage, inheritance and property rights? Today marriage rituals are a farce, just a performance on stage for photographs, a dress-up party. No one actually believes in the religious rituals, as they are constantly reimagined by event managers. In fact, registering the marriage with the state is critical. That piece of paper is far more important than any mangalsutra. Why can that piece of paper not be between two men or two women?

For a marriage certificate defines who the family is to the court. Judges typically favour family over non-family members when the will of the deceased is contested. Within the family, the spouse and children have more rights than siblings and parents. Sons are more valued than daughters, brothers more than sisters. Elder sons valued more than younger sons. Thus it all comes down to the complex issue of property transmission. A gay man’s family who hates him is valued more by judges, and granted more legitimacy by the judicial system, than the gay man life partner. This is another instance of excessive legalism that does not care for justice or truth or love.

A heterosexual man and woman is mocked for having sex outside marriage. A homosexual man is not allowed to marry. Outdated notions of social life continue to shape modern law. In scriptures (shastra), everything changes with time (kala), space (sthana) and nature (guna) of people (patra). Relative to Christian and Islamic laws, Hindu laws are diverse and dynamic. Hindu laws were reformed to stop polygamy and Sati. Surely Hindu laws can be reformed to include same-sex marriage.