Dirghatama in Bihar, Bengal and Odisha 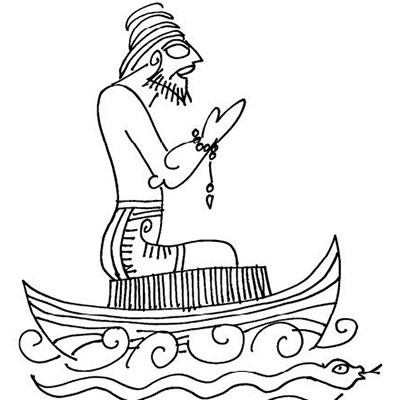 The Rigveda refers to a sage called Dirghatama. He was one of the many poets who composed the Vedic hymns. His most famous hymn is the riddle hymn Mandala 1.164, that is full of puzzles and metaphors and cannot be easily explained by scholars. It refers to everything from the sun to the Big Dipper constellation (Sapta Rishi mandala) to the Pleiades constellation (Pleiades), to the zodiac, to the horizon, to the sun, to the earth and the sky, the dawn, the moon and two birds: one that watched the other eat fruit. Most important is a hymn that suggests that all gods come from a single source, indicating that Vedic civilisation was not quite polytheistic rather its polytheism had an underlying monotheism, making Dirghatama’s hymn a rather complex hymn.

We don’t know anything about Dirghatama from his poem compiled 3,500 years ago. His story appears almost 1,500 years later in the Sanskrit retelling of the Mahabharata. The story is rather interesting and is full of sexual complexities. We are told that Brihaspati was sexually attracted to his younger brother, Uttatya’s wife, Mamatha. He tried to have intercourse with her; however, she was already pregnant. Since Brihaspati forced his advances on her, the child within the womb protested and this angered Brihaspati, who cursed the child that he would be born blind. This child was called Dirghatama, the one who is enveloped in perpetual blindness.

Dirghatama was a brilliant man who was given in marriage to Pradveshi. Pradveshi had many sons by him. However, she got weary of taking care of him and therefore, set him adrift on a raft. This draft went downstream on the river, Ganga, and it took Dirghatama to the eastern part of India, where he was rescued by a king called Vali. Vali realised this was a great sage and invited him to go to his wife, Sudheshna, and father children. The queen was uncomfortable giving her body up to a strange priest, so she sent her servant in her stead. The servant girl gave birth to many children who became great sages. Finally, the king forced the queen to have intercourse with Dirghatama and she bore him five sons, Anga, Vanga, Kalinga, Pundara and Shushma.

Anga means southern Bihar, while Vanga, Pundara, and Shushma refer to parts of Bengal. Kalinga represents Odisha, indicating the Eastern part of India. This has led to speculation if this elaborate story is a proto-history of how Vedic culture spread to eastern part of India through poets such as Dirghatama.
These stories refer to a time when marriage was not associated with fidelity and women had sex with men other than husbands such as brothers-in-law (Brishaspati, in this case) and wise guests (Dirghatama). Mamatha stops Brihaspati’s sexual advances, not on the ground that she was his sister-in-law, but on the grounds that she was pregnant: meaning she had no moral issue with Brihaspati being her brother-in-law. Sudeshna is coaxed by her husband to have intercourse with an educated guest to get smart children. But she takes long to get convinced.

These practices ceased after Shwetaketu’s patriarchal decree, mentioned in the Mahabharata, which forced a woman to be faithful to her husband or only have relations with men he approved of.

The stories perhaps suggest violent confrontation between Vedic sages and tribal kings as the latter slowly assimilated into the Hindu fold through change in food habits and sex practices. This is speculation, of course, if one sees these mythologies as proto-history.