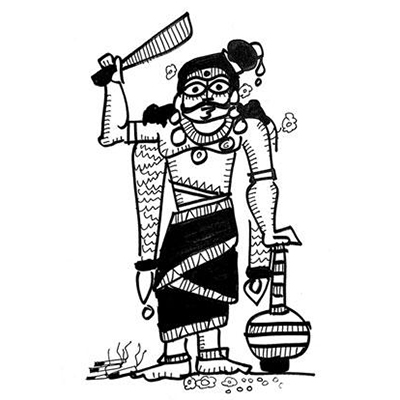 So, the government has appointed a committee to delve into the “true” history of India, starting from 12,000 years ago, since the Ice Age, which Hindutva historians assume is the “pralaya” of the Puranas. The committee has only “upper” caste men. No one from below the Vindhyas, no one from tribal communities. But, there is much in India, and Hinduism, that is neither northern, nor Brahmanical. Take the case of Karuppu Swami for example, the dark-complexioned god, adored in rural Tamil Nadu and Kerala.

In South India, one is familiar with the gigantic temples with its massive gopurams. These temples are found especially in Tamil Nadu, Andhra Pradesh and Karnataka. But these structures are less than a thousand years old. Much older are the tiny village and clan gods such as Karuppu Swamy, who have been worshipped perhaps long before Brahmanism entered south India.

These rituals remind us of the Bhuta performances found in Tulu Nadu in southern Karnataka and Thaiyyam performance found in northern Kerala. These are clear practices from the pre-Vedic times through which the common man connected with the divine spirits, not through images but through masked dancers. Anthropologists are of the opinion that Karuppu Swamy was perhaps a great hero. A hero who protected and defended the land and the local cattle from raiders. Historically, men who died defending the land and protecting the community were often buried. They usually had stones raised at their graves. These were the various hero stones, found all across south India. This probably was the reason that inspired the rise of the Hindu temple in the post-Vedic period.

For example, Karuppu Swamy is part of the divine pantheon associated with Ayyappa in Sabarimalai, indicating his tribal and forest roots. These local ‘desi’ gods are very different from the distant Brahmanical ‘margi’ gods such as Perumal (Vishnu) and Murugan (Kartikeya), whose southern roots are never acknowledged by North Indian Brahmins.

The image of Karuppu Swamy is of a dark muscular god. He usually has two hands, holding either a hooked machete or an aruval, or a spear, chain or gada in one hand. He also has a thick moustache. He is either in a standing or sitting position. He is occasionally riding a horse and is accompanied either by a dog, a lion or a tiger. He is always ready to battle. He is sometimes associated with a consort and sometimes is considered as a bachelor god. In temples, he is offered gifts. These include food, such as meat of black goat or chicken and fish or sometimes alcohol, camphor, ghee, cloves, even cigars and cigarettes. His priests come from “lower” caste communities. They approach him by practising celibacy, all night vigils. They chant his 108 names. They also go into a trance when his spirit enters their body. Doing so, he can solve problems of the local communities. Such as one that are related to marriage, childbirth and property disputes within the family. His worship travelled with indentured labourers in 19th century to the Caribbean.