Dharma is not a game of thrones 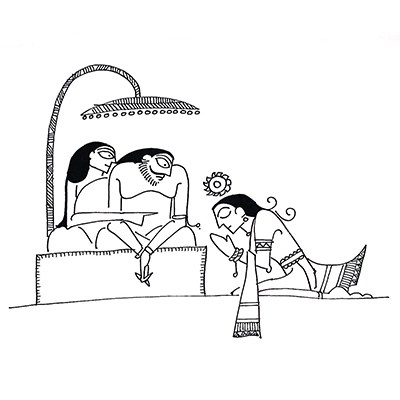 King Nriga was cursed to be a lizard because he, without realising it, stole from one of his subjects. Nriga was known for donating cows to the sages of his kingdom. One of the donated cows slipped out of her master’s cowshed and returned to the royal cowshed. Since the royal cowshed had thousands of cows none of the royal servants noticed her return. Nriga then gave the same cow to another sage. When this sage was returning to his hermitage with Nriga’s gift, the first sage recognised his cow, claimed ownership over her, and accused the second sage of theft. When the second sage clarified that he had received it from Nriga himself, the first sage accused the king of theft.

“That cow was given to me. She is mine. Not the king’s. How then can the king gift her to another? This means the king stole my cow and gave the stolen cow to another sage. I accuse the king of stealing from his own subjects.” Investigations revealed what had happened. Nriga apologised to the first sage and offered to compensate him with a hundred cows. The sage refused. He wanted his cow back. Nriga then went to the second sage and offered to compensate him with a hundred cows. But the second sage refused to return his gift. For this act of hurting his subjects, albeit committed unintentionally, and quite accidentally, Nriga was cursed to turn into a lizard, and stay in this form until he met Krishna. Nriga accepted his punishment with grace.

This story is told by Bhisma to the Pandavas in the Anushasana Parva of the Mahabharata as he gives them lessons on raj-dharma, what makes a great king. A king is responsible for the happiness of his subjects. He is responsible for all the hurt he causes them, even without meaning to. This story is significant as Nriga is an ancestor of Ram, and from the much venerated Ikshavaku clan of the solar dynasty, which gave birth to many great kings, including several Jain Tirthankaras.

We live in times where politicians talk of Ram and Ram-rajya, but take no lessons on what raj-dharma meant to Ram and his Ikshavaku clan. They refuse to take responsibility for failures of their own governance. Quite unlike Ram, who, as per one oral narrative, despite being from the solar dynasty, called himself Ram-chandra, eclipsing his name with the moon to acknowledge his unfair treatment of his innocent wife Sita, who had been banished to protect royal reputation from public gossip.

We are told that the legendary king, Vikramaditya, renowned for his bravery, generosity and governance, also belonged to the solar dynasty. Many years after his reign, Bhoja wanted to sit on his famous throne, which had been discovered in the fields around his ancient kingdom. But when he was about to sit on this throne, the 32 statues of 32 yoginis who formed the base of the throne asked Bhoja if he had 32 qualities that made him as good a king as Vikramaditya. Bhoja cultivated these 32 qualities and only then sat on Vikramaditya’s throne. We live in times when no noble quality is required to be a king. Kingship is based on votes, and votes are won through emotional rhetoric, fanciful storytelling and false promises. More Natya-shastra and less Dharma-shastra.

Who do people turn to today, when kings are busy fighting enemies, real and imagined, or blaming corrupt kings of yore for all governance failures, and when tongues of even well-meaning vidushakas (court jesters who were also critics) are swiftly severed?

In the jungle, the strong feed on the weak. This is matsya nyaya (law of fishes), acceptable for animals, not humans. When humans behave so, it is adharma. In human culture, the strong have to take care of the weak. As per Manusmriti, gods created kings to establish dharma: to create an ecosystem where the weak can also thrive. In raj-dharma, the kingdom is more important than the throne. In rajniti, it is only the game of thrones; people don’t matter except for votes and taxes. Today raj-dharma is seen as idealistic and raj-niti (politics) is seen as more realistic.

For all the talk of Hindu revival, politicians refuse to accept this definition of raj-dharma. Insisting that the ‘system’ is the problem as the ‘system’ is designed for the strong. And so they spend time in raj-niti, helping the rich, who in turn help political parties accumulate funds secretly, so that they can sit on the throne, enjoying power without any responsibility or accountability, letting roads rot, and bridges collapse, knowing there is always someone else to blame. If today’s politicians lived in Nriga’s time, they would change the media narrative and declare the sages to be thieves and claim the cows for themselves.