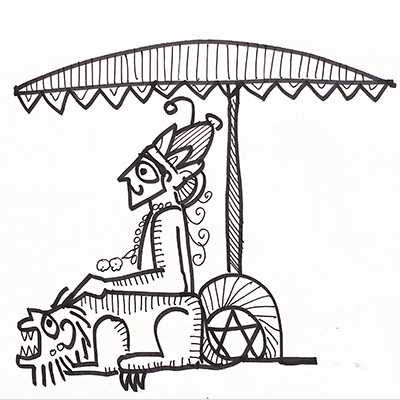 Forming the Government is not the same as Governance. This is most beautifully understood when we compare the concept of Dharma-raja and the Chakravarthi.

Dharma-raja is one who rules by dharma. Chakravarti is one who turns the wheel. This wheel represents the wheel of chariots and wagons that the king spreads in every direction from his capital. The horizon that marks the edge of his kingdom is also circular, hence Chakravarti is the lord whose power extends to the horizon. Chakravarti is a king who rules over a vast kingdom. It is a quantitative concept. Dharma-raja’s kingdom may be big or small, but he rules well. It is a qualitative concept. What matters more? A big government or good governance? A Chakravarti or a Dharma-raja? We admire Chakravartis, conquerors who have vast empires, and big companies, like Alexander and Elon Musk. No one bothers with good kings of small kingdoms.

The Dharma-raja is someone who ensures that everybody in his kingdom practices dharma. Dharma here means the institution of the ritual of yagya. Yagya means the act of giving to receive something. In other words, the Dharmaraja creates an ecosystem of exchange. Every householder is supposed to give things to the world and receive things in exchange. He’s supposed to feed his family, he’s supposed to feed the gods, he’s supposed to feed the ancestors. In exchange the gods, ancestors and family provide for him. The gods here can refer to his king, to his vocation, his customers, or his employers. This is described in Bhisma’s Shanti Parva and Anushasan Parva. Focus here is on governance, not the stretch of the empire.

Chakravarthy is a territorial king, who controls the land around him. This kind of king is described in Chanakya’s Arthashastra. He is someone who people follow. He has an army, a treasury and a team of ministers. He has a hill fort, and has access to power. The immediate land around him is the land that belongs to him. People who work on this land, and its harvest belongs to him. Beyond that are lands that he rents out, and in exchange he is paid rent for it. Beyond this, are lands from where he receives taxes. In exchange for these taxes, he provides those people protection. Beyond these lands are lands that he can terrorize unless he is given tribute. Then there are lands beyond where he receives gifts from kings with whom he makes peace. This is a circular kingdom with maximum control in the centre and minimum control at the periphery. This is also known as Raja Mandala or the circle of kingship. The people who pay tribute to him are sometimes called samantha or feudal lords. Focus here is on size.

The Dharma-raja concept was popular in Vedic times, when kingdoms were smaller, determined by distance traversed by royal horse that the king could manage. However, the Chakravarthy concept became popular in later times in mediaeval India. It spread even to Southeast Asia. It is found in Cambodia, Vietnam, Cambodia, Thailand and Indonesia. The Raj Mandalas are very different from modern states. Modern states are defined with strict borders. They have a bureaucracy which is controlled by the center that collects taxes. Everything is controlled by the center and the bureaucracy does a job; it is no direct stake in the land. This model was popular in Persia, Arabia and Roman Empire, and was popularised by Christianity and Islam that spoke of one god, one king, and his team of ministers who were like god’s archangels. But in India, the more popular market was Raja Mandala, the circle of Kings, where there was a senior king (maharaja) above junior kings (raja) and everyone had a stake in the land.

The Raja Mandala depends on the power and the charisma of the central king. If the king was powerful, his kingdom would expand further and further. More kings would either pay him gifts or tributes. The weaker he became, the kings on the periphery would stop paying tribute. They would then either declare independence or choose another master in the neighbourhood. Thus, the kingdom’s borders were constantly expanding or contracting depending on the power of the king. Thus the Chakra of the Chakravarti was not fixed. It was shifting continuously.

Modern political and economic systems focus on the size of companies and electorate and legislative seats. Market capitalisation, based on stock market sentiment, is more important than governance and good balance sheets. In other words, we live in an era of macho Chakra-vartis such as Jarasandha, who gobble up small kingdoms, and have forgotten Dharma-raja, the hermit-king Ram, who valued governance, and the joy of his people, and was not interested in boosting his ego by looking the the limits of his kingdom.