Dharma focuses on empathy, not justice 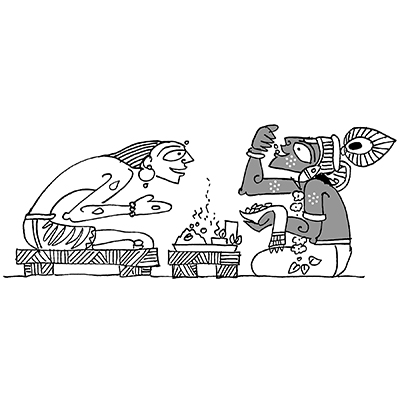 Who is a Hindu?

Once upon a time, there were two friends in a school. They were the best of friends and they promised to share everything with each other. After they graduated, one became rich and one remained poor. The poor friend went to the rich friend and asked for help. The way the friend behaved led to two endings.

Clearly, these stories depict that if you don’t help poor people and humiliate them, there is war and crisis in society. If you help poor friends and poor people, there is happiness in society. But the story is not so simplistic. We are told that Sudama starved himself for three days and gives his three portions of rice to Krishna. This is all that Sudama has. Sudama is giving Krishna three fistfuls of rice: knowingly or unknowingly, this is his investment in a friend. Krishna reciprocates to the kindness, by also giving Sudama ‘all that he has’ in ‘three measures’. We can argue that Krishna has to repay the debt resulting from receiving a gift. Else he will be trapped in debt.

Krishna eats two fistfuls. However, just as he is about to eat the third fistful, his wife catches hold of his hand and says, “Leave some for us.” His wives tell him not to give three measures but two. In essence, he could give two in reciprocity, which more than makes up for his debt, but must keep one for himself. Thus, we see prudence being brought in this story of kindness.

Through such stories, Indians were taught about commerce, debt, exchange, reciprocity, empathy and return on investment. You give in order to get. You cannot get something without giving something. To demand something as your right, as in the case of Dronacharya, leads to rage and violence. Exchange and commerce is more egalitarian while demanding/granting rights has something feudal about it.

Social justice, and justice, is a western discourse: an eye for an eye, a tooth for a tooth, equal distribution of God’s gifts, are the mythic themes that influence western, and now global, politics. Dharma, however, focuses less on the idea of justice and more on the idea of empathy. The strong must help the meek. Everyone has the potential to feed another. Things have to be given voluntarily, without being prodded, rather than asked or demanded. Great kings give of their wealth freely. This is not charity – this is investment for the future. Because hungry people are angry people who will attack and destroy what we have. Those who are fed are happy people who will collaborate.