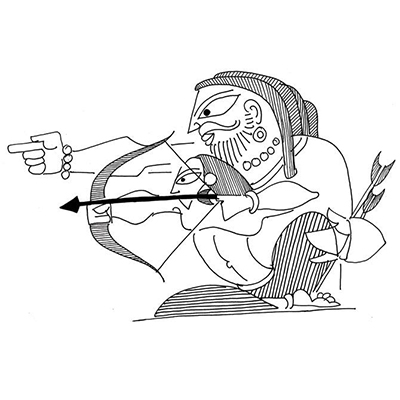 As we go through a global pandemic which demands a major change in our lifestyle and which will have a major impact on the economy, it is a good time to remember a conversation in the Mahabharata, where Bhishma tells the Pandavas, about Apaddharma, or dharma during crisis.

In the Shatapatha Brahmana, dharma is defined as a state of being that reverses the jungle law. In the jungle, might is right; but, in a civilised society, the mighty take care of the weak. In the dharma-shastras, this principle is operationalised using the varna-ashrama guidelines.

Varna means respecting and following the vocation of our forefathers. The various vocations are classified into four groups: the knowledge economy of Brahmins; the land economy of Kshatriyas; the market economy of Vaishyas and the service economy of Shudras. Ashrama means being a student for the first quarter of life; a house holder in the second; a retired person in the third (when the grandchild is born); and renunciation in the fourth (when the grandchild is married). This is complete division of labour as per Varna dharma. There is no burden of more than two generations on the earth’s resources based on our life cycle. This conceptual framework works in an ideal situation; but how does one work during crises? Apaddharma talks about functioning during a crisis.

Once, when there was a drought, Vishwamitra had nothing to eat. He was forced to eat a dog. Another crisis is when a husband dies without having children. What does one do? Dharma shastras allow a woman to have relations with other men to produce children, as we see in the story of Ambika and Ambalika in the Mahabharata. In an economic downturn, it is said that the Brahmins can behave like the Kshatriyas, the Kshatriyas can behave like the Vaishyas. Dharma Shastras give various examples how this can be done, with the caveat that, when the situation is good, one must revert to one’s traditional occupation. But, does that ever happen?

For a long time, Indians didn’t cross the sea, as they believed it resulted in the loss of caste. However, famine and an economic downturn, in the 19th and early 20th century, forced Indians to seek employment outside. Therefore, the idea of kala paani was revoked. Today, people have no issue crossing seas, because the world has changed. Crisis has forced us to change our minds. An economic crisis forced India to liberalise its economy. The crisis passed, but it is not advisable to pull back ’emergency reforms’. They have now become the norm. Economic crisis forces Indians to give up traditional vocations and migrate to cities and to foreign lands to do whatever they can to earn an income. The old jati system exists only in bigoted minds.

Bhishma, in his discourse of political economy, shows the need to change rules in calamity, provided the fundamental principle of protecting and providing for the weak remains. Most of us are staying at home, doing chores we would not do in normal circumstances. Husbands are involved in BJP (bartan, jhadoo, pocha). But, are we providing for our maids and support staff who are also isolated at home or forced to migrate back to village? Will we revert to old habits when the crisis passes? Points we need to consider. For Drona, who was forced to become a warrior in poverty, did not revert to being a priest when he acquired wealth.