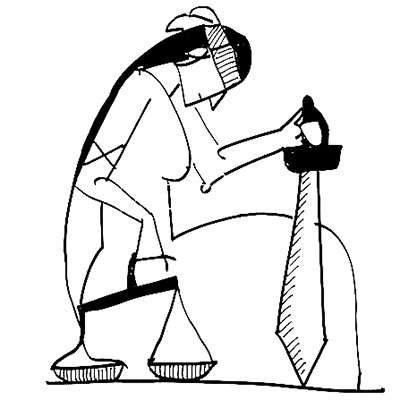 In a crime, the victim accuses the villain. But when the villain counter-accuses the victim, and insists the victim is villain too, we call it ‘whataboutery.’ This word is a neologism, first used in the 1970s in the context of violence in Northern Ireland. Whataboutery creates a moral ambiguity as to who is right and who is wrong. Those at the receiving end see it as the devil’s strategy. Those deploying it insist it is an act of wisdom, to replace a narrow revolutionary focus with a wider social and historical perspective. Whataboutery is most evident during Indian festivals. Here is a case in point:

Left wing: He is a flawed character who abandoned his wife Sita following public gossip about her character.

RW: Ram rescued Sita from Ravana who abducted her.

LW: Ravana respected Sita and was simply avenging the mutilation of his sister by Lakshmana on Ram’s orders.

RW: Shurpanakha was a vile woman who did not respect Ram’s marriage.

RW: You clearly do not care for consent, be it Ram’s or Sita’s.

LW: No one asked for Sita’s consent when she was kicked out of the palace.

These never-ending repetitive conversations have been happening for decades. Earlier the LW felt righteous, as defenders of the minorities, the poor and the downtrodden. In the social media age, the RW is feeling righteous, as they have declared themselves defenders of all things Hindu, from Islamic, Christian, secular, and atheist invasions. Both implicitly believe in the concept of justice.

Now, generations of historians have casually translated dharma as justice. But justice presupposes a single life. Dharma is based on the concept of karma and rebirth. In other words, dharma and justice belong to two very different paradigms. This is rarely factored in even by scholars, who implicitly align with the one-life paradigm.

Christians and Muslims believe that when we die, we will be judged by god on Judgement Day on how we have conducted ourselves in our one and only life vis-à-vis god’s laws. The concept of Judgement Day, and god’s law, is not found in rebirth cultures such as Buddhism, Jainism and Hinduism. One life leads to another, shaping our circumstances based on past deeds.

But Manusmriti and Garuda Purana, as well as Jain and Buddhist mythologies, do refer to multiple hells of torture for sinners before their eventual rebirth into another life. This belief in judgement after death seems at odds with the belief in rebirth: if one has already been punished in one of the multiple hells, then under what considerations is the nature of the next life decided? Be that as it may, justice, in the rebirth context, assumes many lives, many heavens, many hells, and temporary stays everywhere. By contrast, justice in Christian and Islamic context assumes a single life, single law, single heaven, single hell, and eternal stay in the final destination.

Greco-Roman justice meant respecting social hierarchy, and so allowed for unequal distribution of wealth and power. Theoretically, in Christianity and Islam, this idea poses problems as justice is linked to equality, but it applied only to converts and was not in practice in feudal Europe or Persia. On what basis does god decide who should have more and who should have less? Is the inequality at the input level (opportunity distribution) or at the output level (reward distribution)? This is exactly the conversation in modern academic circles, where the influence of Christianity and Islam is undeniable, considering these faiths dominate 50% of the world, and colonisation gave rise to similar institutions around the world. Justice and equality are hegemonic ideas today. Secularism is conditioned to see them as good and decent and right. This is why it feels rational when we challenge oppressors. We accuse the privileged and the elite of injustice and unfairness. When they push back, with counter accusations, we see it as whataboutery.

Nature has no rights

Animals do not seek justice. Justice is a human construct. In nature, there is no villain, victim, or hero. There are only the eaters and the eaten. In the Mahabharata, when a king tries to save a dove from a hawk, the hawk tells the ‘just’ king to first find it an alternative source of food. The only way out for the king is to offer his own flesh! In nature, there are no rights or properties. The strong wins. The weak cannot inherit. When Arjuna, a prince, has a dispute with a Kirata, a tribal, he has to indulge in a duel to claim the wild boar he shot.

There is no equality in nature either. Nature is full of pecking orders. But there are no favourites either. It’s a pure meritocracy. Every plant and animal has strengths, weaknesses, opportunities, and threats. Nature balances the system so that the number of prey is balanced by the number of predators. And even the strongest has to eventually grow old and die. Immortality and eternal claims over land are cultural, not natural, themes.

In the forest, where there is no law, there is no concept of marriage, husband, or wife. No concept of fidelity. So, as creatures of the forest, Shurpanakha and Ravana are behaving as animals will — using force and cunning to get what they want. Ram, Lakshman and Sita, as creatures of domesticated spaces, are behaving as cultured civilised beings should, upholding man-made codes of decency and propriety. Cultural standards, however, cannot be applied to animals and creatures of the forest. Ravana alone, not Shurpanakha, is judged, since he is presented as being educated in Vedic ways, just like Hanuman. Ravana, king of Lanka, struggles with fidelity. Vali, king of Kishkinda, struggles with sharing. Neither Lanka nor Kishkinda belongs to Aryavarta, where dharma-shastra is instituted and established. In dharma, the strong take care of the weak, but doing so goes against the natural order, where the strong feed on the weak. Thus, the practice of dharma cannot escape dharma-sankat or moral and ethical dilemmas.

Dharma-sankat is what whataboutery reveals. It shows that victims in one context can be villains in another. Modern courts insist that a case being discussed must be seen in isolation, and not contaminated by other pending cases. For the crime of murder, it does not matter if the killer is a king or a beggar, if he is kind or cruel. But in the dharma discourse, all contexts have to be considered. The focus must be balanced with perspective. The king is reminded constantly that he has no role in natural conflicts, only in cultural ones. Arjuna is asked to behave with greater grace than an entitled brat.

Traditional Indian dharma theory valued rebirth, denominators and contexts, the heterogeneity of diversity over the homogeneity of equality. Ram, the king, is great. Ram, the husband, is not. Ravana, the brother, is good. Ravana, the king, is not. Of course, like justice, the dharma discourse is open to all sorts of cleverly argued rational manipulation, by the devil, say some, by the ego, say others.