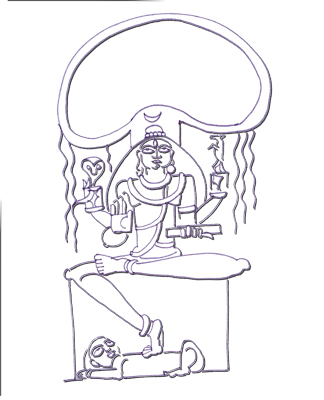 Logically speaking, living in South Mumbai did not make sense to Ravindra. His office was in the distant suburbs of North Mumbai. As CEO he could have got himself a bungalow nearby, or maybe in the central suburbs, which is equidistant from every corner of the metropolis. But everyone told Ravindra that the people who matter live in South Mumbai. A house was not about convenience, it was also about status and significance. Ravindra knew that both he and his wife craved to belong to the movers and shakers of the city, and they seemed to be living in South Mumbai. So when he took over as CEO, he demanded that his accommodation be in South Mumbai. The rates were astronomical and the CFO protested. But Ravindra would hear no argument. He knew the value of what he was seeking. He was no Shiva. He understood the rules of Daksha’s game.  So finally a flat was found, not a large flat, about half the size of the one near the office, and with fewer toilets, and parking spaces. But it was made the official residence of the CEO,who was more than happy to travel for 2 hours each way for the sake of prestige.

It is this notion of value that enables in maximizing revenue. Value transforms a commodity into a brand, allows for the charging of premium. People do not buy products or services or ideas; they buy value. Value mitigates imagined fears, satisfies the predator and comforts the prey that lurks in every human being.