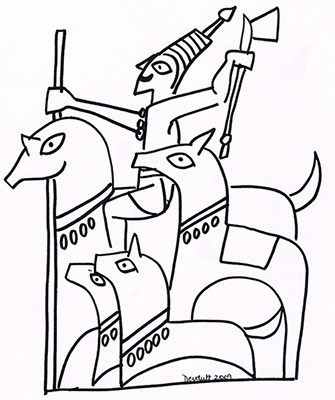 In the 19th century, Indians started being educated in English. And they were exposed for the first time to European literature. This was the literature of the colonial master and was presented as the standard: how literature should be. Naturally, when Indians started retelling the epics of India they modelled their writing along the lines of the Bible and the Greek epics. They wanted to tell the master that India had its own share of Achilles and Hector and Odysseus and Moses.

The idea of the hero was not alien to Indians. Their tales are found in the many ballads of the land. There was the valorous Alha of Bundelkhand, the love songs of Heer-Ranjha and Soni-Mahiwal from the Punjab. But these were raw, earthy, and parochial narratives, in a language of the common man. The writers sought a pan-Indian hero, one who emerged from the classics that appealed to the sensibilities of the elite, from a refined language approved by the master: the ‘Latin of the Indies’ – Sanskrit. So role models were sought in the Ramayana and the Mahabharata.

But the protagonists of the Hindu epics were very different from their Greek and biblical counterparts; they were not answerable to gods or God, they were Gods themselves, albeit mortal forms, playacting to bring enlightenment to humankind. Attempts to transform Ram and Krishna into heroes to satisfy the rising tide of nationalism created issues.

It was difficult to make a role model of Krishna who was prankster and a romantic rake, surrounded by milkmaids who swooned to his music. Shiva, with his ash-smeared narcotic-smoking indifference, was tough too. Ram seemed to fit the bill, as he was a good son and an obedient prince, and faithful to a single wife. He had raised an army of monkeys and bears to rescue his wife from the demon-king. Ram could easily serve as a model to nationalists seeking to liberate ‘Mother India’ who had been chained by the English rulers of the land. But social reformers and feminists cried foul. Ram had beheaded Shambuka, a member of the lower/oppressed classes for attempting to be a hermit. Ram had banished his wife following street gossip about her reputation. Ram was not good enough to be role model. Who then? Maybe Arjuna, the great archer of the Mahabharata? Or maybe Bhima, the mighty Pandava? But had these men not kept quiet when their wife Draupadi was being gambled away like chattel?

Asceticism and celibacy had long been valorised in India. Role models who were remotely sexual were out rightly rejected. The romantic was barely tolerated and the homosexual not even acknowledged. Some scholars trace it to the popularity of Buddhist monasticism. Others trace it to Tantrik lore where retaining semen grants humans magical powers to the jogis. Still others trace its contemporary popularity of the Jesuit missionary of the 19th century who took the vow of poverty and obedience for the good of the people. Historical figures like Chanakya and Shivaji were constructed along these lines — social reformers with no personal life. Naturally many national leaders modelled themselves along these lines. So we find the rise of sage-nationalists like Vivekananda and Rajagopalachari and of course, Gandhi, whose experiments with truth in relationship to semen retention in the company of women raises many ethical questions today, but which we brazenly edit out from all textbooks preferring to focus only on his doctrine of non-violence that created a nation out of India. Those who were not so celibate, downplayed their sexuality by choosing to project themselves as avuncular statesmen.

Bollywood changed all that. Market forces revealed a very different role model. We began with the socialist Balraj Sahani, and the tragic Guru Dutt, but quickly moved to the dancing Shammi Kapoor, and eventually to the bare-bodied Salman Khan. We wanted role models who reflected the age: the angry young Amitabh of the License Raj, the irrepressible romantic called Shah Rukh Khan. At first we wanted earnest Zanzeers and Deewars who reined in criminals and outraged Singhams who bashed up corrupt politicians. But eventually we wanted powerful, even cunning, winners, not noble losers. So much so that even anti-heroes rose in popularity, preferably slick underworld dons, who cock a snook at the system.

Cricketers followed suit with unabashed captains who take off their shirts in full view of the stadium to mock the erstwhile rulers of the land, and powerful captains who made cricket less about gentlemen, and more about glamour. No one spoke of bedroom habits of the icons. Bookie conversations were hushed up. Only victory mattered, nothing else.

In many ways our quest for the perfect role model failed us because life is not perfect and humans are not perfect. This is what the timeless epics of India sought to communicate, a truth that we chose not to hear as we sought alignment with European ideals. God who walks the earth as Ram and Krishna does not strive to be perfect. He strives to do the best he can under the circumstances, sometimes upholding rules, sometimes bending the rules. But we are so desperate for role models, someone we want to idolise if not emulate, that rather than understanding their actions and learning from them, we preferred judging them, either placing them on pedestal, denying them their shortcomings, magnifying all their actions, getting violently outraged at any criticism directed at them: in effect, denying them their humanity. We imprison them with our expectations. Such is the terrible fate of all role models.

This article is also listed under Mahabharata, Ramayana, World Mythology