Desire and the Goddess 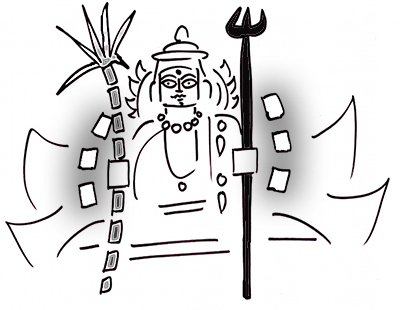 In Buddhist belief, the greatest enemy of Buddha, who seeks to outgrow desire, is Mara, the demon of desire. In Hindu belief, Mara is Kama, god of desire. Kama raises his sugarcane bow, shoots a flower arrow at Shiva, the hermit, the lord of yoga, to ignite desire in him. But Shiva opens his third eye, releases a missile of fire, sets Kama aflame, until he is reduced to a heap of ash.

If Shiva does not marry, he will father no children and the demon, Taraka, will not be killed. Nothing will grow: the bee will not come to the flower, the bull will not go to the cow, the earth will be bereft of life.

So the Goddess comes to Shiva as Kamakshi. Her name is similar to Kama; she also bears the sugarcane bow and flower arrows of Kama. She dances on top of Shiva, she sits on him, appeals to him to open his eyes, and accept her as his wife, not for his sake but for the sake of those who are terrorized by Taraka.

Shiva finally opens his eyes; he becomes Shankara, the benevolent one, who marries Kamakshi and they have a son called Kartikeya who kills Taraka.

The seed of any enterprise, any yagna, is desire, kama. Unless the yajaman has a desire, the yagna will never start. There will be no exchange, no marketplace. For wealth creation and wealth movement, there has to be bhoga, not yoga.

In the modern world, marketing exists to destroy yoga and invoke bhoga. The yogi who seeks to withdraw from the world is the greatest threat to the market place. He has to be seduced. That is why Indra sends apasaras to seduce them. The hermit is exchanged in solitary activity that distances himself from society. As householder, he becomes part of society, of exchange, of giving and taking.

In the Ramayana, when Dashrath wants to perform a yagna that will get him sons, he is advised to call the sage Rishyashringa. The sage has been raised all his life without knowledge of women. He has no hunger and so nothing will compel him to leave his hermitage. So Dashrath sends Shanta, daughter of Lompada, to enchant him and bring him to Ayodhya. Shanta succeeds, Rishyashringa comes to Ayodhya, performs the yagna and Dashrath gets four sons. It is the desire of Dashrath that leads to the seduction of Rishyashringa, the performance of the yagna, and the birth of Ram and his brothers. If Kama had not shot his arrow, if there was no desire for bhoga, there would be no Ram, no Ramayan.

It is not accidentally that the word in Vedic literature for the trader, vaishya, is very similar to the word for prostitute, veshya. Both were associated with the bazaar, the market, where Lakshmi is created and exchanged. That is why during festivals of the Goddess, clay is collected from the house of the veshya to make the image, and money from the house of vaishya to prepare the pandal. They give shape to the center of the celebration.