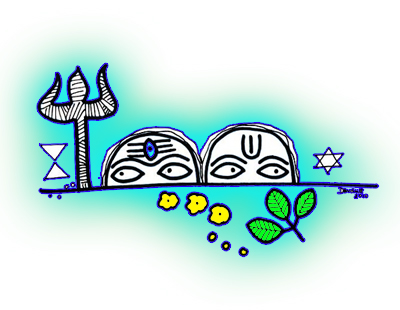 In Hindu mythology, there are three worlds, three Goddesses and three Gods.

The three Gods include Brahma, Vishnu and Shiva who create, sustain and destroy. What is most baffling about this triad is that the sustainer and destroyer are worshipped, never the creator.

The root of this bafflement lies in a template that spellbinds the modern mind. It is the Western template, informed greatly by the Bible, where God is the creator making the Devil the destroyer. To understand the Hindu trinity one needs to break free from this Western template.

The world Brahma creates is not the objective world. Hindu seers had scant regard for the objective measurable reality. They believed that the human mind is so prejudiced that it can never ever truly break free from the fetters of bias. They focused their explorations on subjective reality, the virtual image of the world that every individual constructs in his or her mind.

Data for this mental image of the world comes from the five senses. It is then shaped by prejudices, both positive and negative, which in turn is informed by memories and dreams, both pleasurable and painful. This is Brahmanda, Brahma’s world. This makes each and every breathing person a Brahma. Hence the Vedic maxim: aham brahmasmi, I am Brahma.

We are creators of our subjective world. And our behavior is a function of this constructed world of ours. While most of us construct a finite prejudiced worldview, it is theoretically possible to construct an infinite unprejudiced worldview. He who does that becomes one with the brahman, divinity itself. Until then, we remain Brahmas, unworshipped creators. Life is a journey from construction of Brahmanda to its deconstruction, from creation to destruction, from Brahma to Shiva.

Our constructed world has three components, visualized as the three Goddesses: the material component or Lakshmi; the intellectual component or Saraswati; the emotional component or Durga. LSD, in short! As we seek to make sense of our lives, we chase LSD. Though the Goddesses belong to no one, we seek to possess them, control their flow, make them predictable and dependable, though to our dismay they remain independent and whimsical.

Lakshmi matters, because she is wealth and health and fortune. She is critical to our survival. But survival alone is not motivation enough. Besides L we seek Durga, emotional gratification. We yearn for significance; we yearn to feel good about ourselves, we want to believe we matter. That is why we are not content acquiring and securing food, clothing and shelter. We want to feel important in the social order of things, in our family, amongst friends and peers. Hence the desire to enhance our careers, increase our influence in society and expand our business empires.

The pursuit of material and emotional gratification becomes an addiction. Growth is never enough to guarantee survival or satiate significance. One feels as if one is running on a treadmill of unpredictable speed. If you don’t keep up, you will fall. Fear of the fall keeps us running. As Brahmanda expands, it splits into three. This is Tripura, the three worlds, comprising of who we are, what we possess and what we do not possess. In other words: me, mine and others.

Invariably ‘me and mine’ matters more than ‘others’. In our myopic vision of our world, we delude ourselves that ‘others’ exist only to ensure the survival and significance of ‘me and mine’. This delusion is rooted in our scant regard for Saraswati, the S of LSD, who constantly draws attention to the other Vedic maxim: tat tvam asi, you are Brahma too.

In delusion, we forget that others around us are also constructing their own subjective realities, harboring similar ambitions of survival and significance, and having their very own Tripura. And in other peoples’ Brahmanda, our ‘me and mine’ is relegated to the world they address as ‘others’.

When my Brahmanda expands at the cost of your Brahmanda, conflict is inevitable. We end up as beasts fighting over territory. We end up playing the game ‘dog & bone’ and find glory in being the alpha male. At the core of this game is the human fear of insignificance. This fear fuels our cupidity. This fear makes us go to war.

With his third eye, Shiva destroys Kama or cupidity, burns the three worlds and smears his forehead with three horizontal lines of ash. That he holds in his hand a trident, three blades united at the staff, is a reminder that the Tripura is a manmade construct born of human fear and imagination, and not a natural construction. That he demands offerings of Bilva sprigs that are constituted of three leaves joined at the base, is a reminder that true happiness comes when we balance our craving for survival and significance with sensitivity for others. Lakshmi and Durga without Saraswati will not work.

Vishnu facilitates this journey from Brahma to Shiva. Peace will come only when we empathize with others, when we realize that everyone is in the same boat, fearful Brahmas grappling with existential angst. From empathy comes dharma, elaborated in the epics, the Ramayana and the Mahabharata, where as Ram and Krishna, Vishnu demonstrates the human ability to overpower the animal instinct to dominate, and make room for the helpless and the unfit. Only when we care for the other, will we stop being territorial beasts. Only then will LSD be shared rather than hoarded. Only then will we achieve what is aspired for in the triple chant that concludes all Hindu rituals: shanti, shanti, shanti-hi.