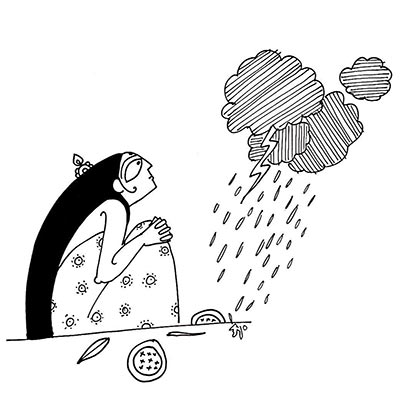 And yet, in Indian literature, dark clouds looming are a metaphor for joy, for it indicates the arrival of the monsoons after a long hot dry spell, maybe after a drought. Dark clouds are translated as ‘ghanashyam’. Its arrival makes the peacock dance in joy. Thus the imagery is created of a returning lover who has been away for a long time from home either for a war or to trade or to graze cattle in the faraway pastures. Ghanashyam also refers to Krishna, much loved deity of Hinduism, associated with longing and pleasure.

In northern European countries, sunlight and heat are in short supply and hence the arrival of the sun is seen as the arrival of God. Cold climate, snow and grey clouds came to be associated with the Devil. God was all that was bright. All that was bright was good. This extended itself to racism. God became white and the Devil black. We see this in the religious imagery that rises from Europe. So naturally, even today, Westerners are appalled that Hindus worship ‘the Dark lord’ — Krishna or worse, ‘the Dark lady’ — Kali. Hindus immediately clarify, “Actually, he/she is not black, he is blue-black!” This association of darkness with evil, with criminality, with sorrow and misery is one of the reasons why most models in television advertisements tend to be white and why even ‘ethical’ companies have no problems equating ‘fairness creams’ as a lever of success and happiness in the world.

In India, poets realized that too much rain was bad and too much was also bad. Too much rain led to flood and too little rain led to droughts. And so there was great rivalry between two Vedic gods: Indra, the rain-god, and Surya, the sun-god. This rivalry is seen in both the Ramayana and the Mahabharata. In the Ramayana, there is rivalry between Indra’s son, Vali, and Surya’s son, Sugriva; here, Sugriva wins. In the Mahabharata, there is rivalry between Indra’s son, Arjuna, and Surya’s son, Karna; here, Arjuna wins. Thus the two epics balance the victories of the rain-god and sun-god.

European translators of the Veda without realising it imposed their view of the world on Indian stories. Thus they saw dark rain-clouds as the demon Vritra who is conquered by Indra with his thunderbolts so as to release rain. They saw Vritra as the ‘serpent’. What they failed to see the complex relationship in Vedic and even later Hindu mythology between rains, serpents and elephants. The gods of rain (Indra), wealth (Lakshmi) and prosperity (Ganesha) are associated with dark clouds, rains, serpents and elephants. Dark elephants were not seen as evil (a word with no translation in Indian languages). And the popularity of white elephants had nothing to do with them being ‘white’ but had a lot to do with them rising from the ocean of ‘milk’.

When Marco Polo visited India, he noticed that people loved the dark complexion. Vishnu was dark, Krishna was dark, Ram was dark. Dark was associated with fertility of the soil. White was also popular: Radha was fair as champaka flowers and Shiva was fair as camphor (Karpura-go-ranga) . White was associated with milk and butter. Neither was white superior to black nor black superior to white. Each one was valid.

Shiva is sometimes dark as Kala-Bhairava and sometimes fair as Gora-Bhairava. The Goddess was sometimes the dark Kali and sometimes the fair Gauri. The darkness was associated with the forest and fairness with the rain, darkness with wilderness and fairness with civilization. One was not better than the other. Both were needed for the circle of life. There is diversity only in the forest, not in the field; the field offers security that the forest does not. When it is very hot, we yearn for dark clouds. And when it rains too much, we want the dark clouds to go away.