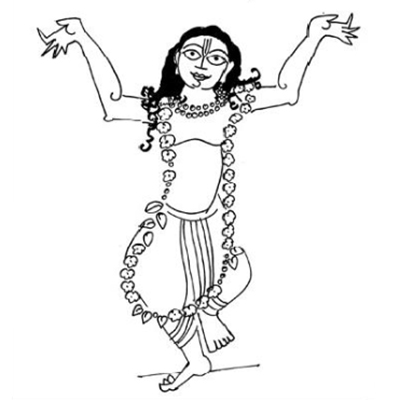 In America and Europe, one often encounters white men dressed in orange robes, wearing beads and garlands around their neck, vertical marks on their foreheads, holding kettle drums in their hands, singing and dancing—a format that many find colourful, amusing, mildly irritating but harmless. They keep chanting Hare Ram, Hare Krishna. These are members of an international society seeking to bring Krishna consciousness beyond India to the rest of the world.

This movement emerged in the 1970s, alongside the hippie movement, when the youth of the world was seeking alternatives to material and mechanistic ways of life offered by capitalism and communism. Unlike the hippie movements which focused on casual drugs and tantric sex, however, this was more puritanical, based on vegetarianism and controlled sensuality, with a high sense of grace and aesthetics based on the concept of ‘Madhurya-ras’ or the joyful honey-sweet emotion that is evoked by realising Krishna consciousness.

This movement is inspired by Chaitanya Mahaprabhu, who merged the bheda-abeda (dual-nondual) form of Vedanta with Krishna-Radha bhakti, 500 years ago in Bengal. His Gaudiya Vaishnav Parampara (Bengal school of devotion to Vishnu) popularised ecstatic public processions involving singing, chanting and dancing. This was reframed, redefined and popularised by Swami Prabhupada in the 20th century for the international audience.

The moment you are initiated into Krishna consciousness, you get a new name, and you adopt new costumes, customs and beliefs. It seems almost like the baptism that the West is familiar with. However, in traditional centres such as the temple of Jagannath Puri, which was central to Chaitanya’s faith, Caucasian men and women are debarred from entering the temple, even if they insist they have secured diksha from a guru, and have been strictly following Hindu rites for decades. This is because in traditional Hindu society, caste is inherited. And, only members of Brahmin caste can wear the sacred thread and access the Vedas. You are a Hindu; you cannot become a Hindu.

The Krishna consciousness movement has been criticised for following a highly rigid western template, a result of many of its administrators coming from Europe and America. The movement, for example, values the orant gestures (raising arms upwards in a pleading gesture) seen in many Christian communities, attributed to Draupadi in the Mahabharata, over the traditional pranam or namaste. Another example is the obsession with the Srimad Bhagavatam, over other scriptures, making it a Bible of the movement. There is a strong drive towards monotheism, rejecting the fluidity of Hindu theism, by projecting Krishna as the true complete form of God. Other forms of the divine in India, including Ram, Shiva and Ganesha are seen as inferior, described as godlings and demi-gods. It is even argued that the Ram in ‘Hare Ram, Hare Krishna’ chant is not Ram of Ramayana but Balarama, the elder brother of Krishna. The sense of hierarchy is palpable, as is the rigidity. This is discomforting for Hindus from other traditions. That being said, this movement remains undoubtedly one of the most visually impactful manifestations of contemporary global Hinduism.