Customer is not the Only God 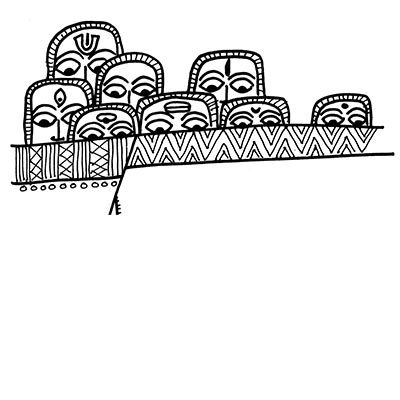 In Hinduism, every thing and everyone is a devata, or a deity. That is why it is not difficult to offer prayers to a rock, a cow, a tree, a person. There are temples to heroes and martyrs, but there are also temples dedicated to deemed villains such as Ravana and Duryodhana.

European Orientalists of the 19th century, and many Indians of the 21st century, believe that this indicates a simple primitive mindset of a pre-religious people. Such a condescending belief is rooted in the assumption that monotheism is superior to polytheism. Such condescension obscured analysis.

The attribution of ‘devata-hood’ to every thing and everyone was an attempt to draw attention to the uniqueness of all things. Nothing was without value. It enabled celebration of diversity, as everything in nature mattered to someone.

The monotheistic mindset is the reason for the phrase: ‘customer is God’. So all things are done to please the customer. A shrewd analyst will observe that the only other beneficiary of this belief is the shareholder. Thus the phrase is a clever way to exploit employees and vendors, give them minimum payment and make them work that extra mile. It is this mindset that assumes that corporations exist only for the benefit of the consumer of its products, services and ideas.

But in the Vedic mindset the purpose of the yagna was to benefit everyone who came in touch with it: the yajaman who initiated it, the various pandits who contributed to it, the various craftsmen and labourers who provided the pots, the bricks, the ladles, the mats, the fences of the ceremony, the cowherds and farmers who provided the ghee and the grain, and of course, the invisible gods who would partake of the ceremony. The yagna was established a medium of exchange between various stakeholders. The gods were fed. But so were those who fed the gods. Everyone was fed. And the yajaman would say: sarva sukhina bhavatu, may everyone be happy. Everyone included not just those who were in immediate contact of the yagna but also those beyond its influence — the ancestors, the ghosts, the animals, nature beyond the boundaries of culture. Everything and everyone was considered.

Likewise an industry impacts everyone not just customers. It impacts the employees, the vendors, the suppliers, the society at large, and of course the ecosystem. We need to be aware of all of them. Every stakeholder is a devata. Every non-stakeholder is also a devata. A successful organisation is one that enables everyone who is in touch with it to generate sustainable wealth.

This is a highly demanding proposition, especially if one believes wealth is finite and that to be a ‘have’, we have to create ‘have not’. Thus to create value for the customer and the shareholder, someone has to suffer: usually vendors, partners and employees. This is a highly prevailent mindset amongst many business people and is a recipe for exploitation. This is a mindset of those who believe all capitalism is crony capitalism and all rich people are evil. It reveals a mind that believes wealth has to be stolen, that it cannot be generated. It reveals a mind that refuses to see the devata in every person, that every person has the ability to give value — some value — if properly invoked. It is a mind that denies the humanity of humans.