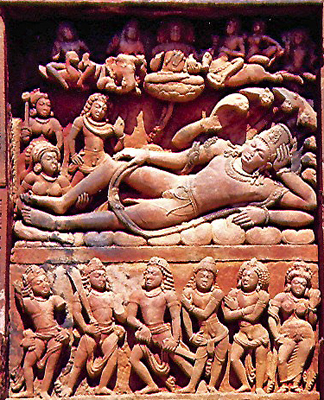 In the beginning there was Narayana who slept in a dreamless slumber. He slept in the coils of a serpent with innumerable hoods called Adi-Ananta-Sesha, meaninging one-infinity-zero. And the serpent floated on a sea of milk that was still and unmoving. As long as Narayana was in slumber the world did not come into being. Creation began when he awoke. This is the most popular version of creation found in the Puranas. It is a vivid imagery that is very clearly a code, and not to be taken literally.

The ancient poets and sages realized that when we are in deep slumber we are not aware of the world around us. Functionally speaking, our world does not exist when we are in deep sleep. In this state the serpent is called Sesha, or residue of nothingness, meaning the number zero. Our world comes into being only when we awaken and become aware of our surroundings, and we distinguish ourselves from our surroundings. In this state, the serpent is called Adi, or one, when reality is experienced, when we realize that we live ‘in’ a world that is distinct from us. Then we realize that we can influence that world in innumerable ways. This is Ananta, or infinity of possibilities.

This approach to creation is unique to Indian thought. It focuses on subjective reality, not objective reality. The ocean of milk is our mind waiting to be churned so that it produces ideas just as milk when churned produces butter. The serpent is our imagination that can either sense objective reality only as in the waking state (Adi= one) or imagine infinite ways to improve it (Ananta = infinity) or not sense it at all as during slumber (Sesha=0).

So a customer enters a grocery store and looks around. The shopkeeper looks at him and does not bother to engage with him. This is Sesha, the state of nothingness, as nothing is being done to churn the ocean of possibilities that exists in the shop between the customer and the shopkeeper. This is slumber, destruction.

Zero turns into one, Sesha becomes Adi, when either the customer states his objective or when the shopkeeper offers to help. The slumber has been shattered. The shop awakens with the shopkeeper and the customer making a connection. This is what is called the moment of truth, when a transaction can take place because one has chosen to engage with the other. Unless this happens, there can be no business.

Should the customer ask for something and the shopkeeper delivers it, the state of Adi reaches fruition. After this there are two possibilities — return to slumber or the movement of Nara to Narayan, from one to infinity. And this can happen only when the shopkeeper says, “Anything more I can help you with?” or if the customer says, “Anything else you have to offer?”

With these questions, a whole world of possibilities awaken. Imagination stirs like a serpent with infinite hoods. Adi becomes Ananta, one becomes infinity, and all sorts of ideas pop into the imagination. The shopkeeper can do this by extrapolating from the shopping list given to him and come up with other products and services that might interest the customer. The customer can provoke the shopkeeper to present a bouquet of new ideas and thoughts that might interest him. This is a fertile state, with limitless paths. This is where the customer ends up buying more than he planned and the shopkeeper squeezes more out of the customer’s wallet than he would have in the Adi state.

Often, customers and those who serve them are in Sesha state, waiting for the other to make a move. Nothing happens then. It is slumber. It is destruction. Many a time, transactions take place based on need expressed by the customer. This is the reactive Adi state. Business booms only when the customer and those who serve them engage in dialogue that involves proactively churning the milk, stirring the imagination, coming with new desires and wants and expectations that makes the customer want to spend more. That is Ananta.