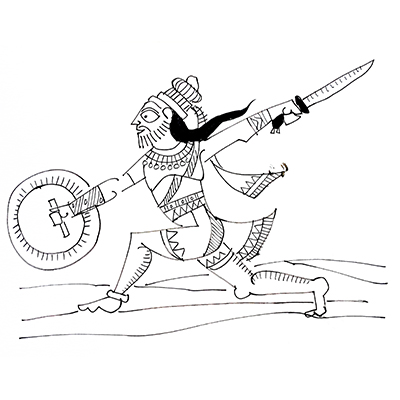 In Hindutva’s political history, the Mughals were dacoits, who came from the North-West. A peer-reviewed history of India, of course, says that is not true. Foreign tribes have been entering through the North-West for a very long time. They all established their rule. The successful ones collaborated with local Indian culture. Those who did not failed.

Amongst the earliest arrivals were the Greeks, following Alexander the Great. The earliest depiction of Balaram and Krishna comes on the Indo-Greek coins, about 2,100 years ago. They controlled regions now called Balochistan, Sindh, Rajasthan and Gujarat, and parts of Punjab. Then came the Scythians or Sakas and the Parthians or Pahalavas. One of the Shaka kings is linked with one of the first royal Sanskrit inscriptions (prasasti) ever to be found in India. Such was the influence of Indian ideas on these foreign tribes when they arrived. These foreigners were interested in Buddhism, Jainism and had Brahmins serving in their courts too.

Then we have coins of the Kushans, showing the earliest images of Shiva with his trident and his bull. There are images of Mahasena or Kartikeya. There is a goddess with a lion identified as Nana from the North-West. This is another goddess holding the horn of plenty identified variously as the Greek Tyche, the Roman Fortuna and the Hindu and Buddhist goddess known as Shree.

‘Kushan’ is an Indianized name for the Chinese ‘Kuei Shang’. The Kushans were tribes who were forced out of southwest China as the Han dynasty expanded its power westwards. These tribes migrated through the region known as Gandhara to India. In the 1st Century CE, the Kushan empire stretched from Afghanistan in the West, to Mathura in the East. Their coins show that they were agnostic about religion. The coins on the Indian side had Indian gods, even images of Buddha. The coins on the Afghan side had images of Zoroastrian deities, as well as Roman and Greek gods. We are introduced to the goddess Nana in these images. She later became associated with Naina Devi of the hills, and the Goddess Durga. She was associated with Shiva. The goddess of fortune came to be associated with Lakshmi.

The Turks, who came after 10th Century AD, brought with them an entirely new culture. They admired the Persian culture, and they followed the Muslim way of life and were not interested in the local Brahmin influence. The Delhi sultans were relatively parochial. Their communities were insular. They were conscious of their alien status and they saw India as conquered land. The kingdoms did not stretch too far beyond Delhi, and did not last too long as there was continuous in-fighting between ambitious tribal warlords. Perhaps, the refusal of Khiljis, Tughlaqs, and Lodis to collaborate with Indian ways amplified their status as outsiders.

But the Mughals who came five centuries ago were successful in India far more than earlier Delhi Sultans because they collaborated with local Rajputs. They also adopted many Indian cultural practices. We know that Jehangir’s mother was a Hindu Queen. Shah Jahan’s mother and grandmother were Hindu queens. It is during the Mughal period that Holi started being celebrated in the royal palaces. These practices would have been frowned upon by the truly orthodox ulema. When the later Mughal kings became less collaborative and assimilative with Indian culture, their power declined.

While historians argue who were invaders and who were not, who were good kings and who were great, we should instead understand policies of kings who were successful, who reigned longer, and whose reigns saw economic prosperity. And in most of these cases, we find kings who were willing to collaborate rather than simply command and control.