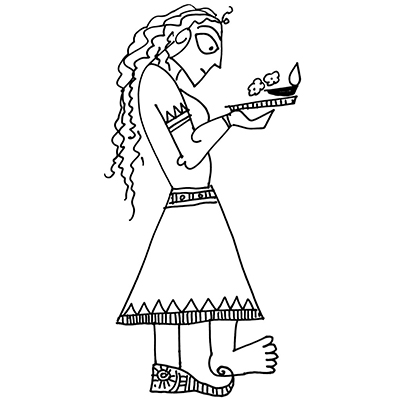 A friend pointed out that the popular fairy tale Cinderella is very much like a vrata-katha: a girl in trouble, tortured by female members of her family, prays to and is saved by a goddess (fairy godmother in this case). But grace depends on her following certain rules (return home before midnight). And all’s well when she becomes a wife.

Vrata means an observance, mostly by women. It does not involve intervention of brahmins, though in many cases priests have wormed their way into the ritual. It basically involves fixing one’s mind (dyana, in Sanskrit) on a deity. This is facilitated by following some prohibitions like not eating some foodstuffs and some observances like preparing particular kinds of food, and offering a certain number of flowers and leaves (seven, ten, nine or sixteen). A pot or a mound of rice or clay represents the deity, to whom usually lamps, incense, fruit, leaf, flower, water, and milk is offered. It may involve the tying of a holy thread on the arm or wrist or ankle, knot being the Indic code of connection or bondage.

The purpose of this vrata (known as osha, in Odisha) ritual is very mundane, never mystical. It is about health and wealth for the family. The housewife is the priestess of the household, through whom positive energy is channelled into the home. In unusual cases, men perform vrata. The stories of the vrata katha are most interesting as they speak of coping with family issues. In these stories, women are helped by goddesses and gods, who serve as inspiration or motivational catalysts, granting them inner strength and magic to face a trying situation. Were these the earliest forms of feminist literature? Of course, many modern feminists refuse to empathise with anything traditional, assuming feminism is a modern invention. Folk songs often speak of women finding strength in heroines like Sita, Draupadi, Kunti, Damayanti, Savitri who overcome hurdles and obstacles, and the disappointment embodied in Prince Charming.

The most famous of these vrata-kathas in India, thanks to Bollywood, is the solah-shukra-vrata of Santoshi maa. Here, a woman is tortured by her sister-in-law, who gives her a roti made of husk flour and foul water in coconut shells until she venerates Santoshi-maa on Friday, a worship that demands she not eat anything sour, and make offerings of gram and jaggery.

In Odisha, one hears the story of a girl called Topoi, as part of khudurkuni osha, who is ill-treated by her sisters-in-law after her brothers set sail to faraway Bali, for trade, until she prays to Mangala, the goddess of good fortune. Worship involves building a sand temple on the beach, and offering the goddess a share of her frugal meal made of roasted broken rice (khuda, in Odia), usually kept aside for servants in rich households. It is interesting in this story that problems start for Topoi after she asks for moon-shaped jewellery from her brothers, and problems are solved after she prays to Mangala on Sundays, a shift from a lunar to a solar deity. In the story, the villain is a Brahmin widow, who corrupts the wives of merchants, and the solution takes the form of the brothers finally returning from their sea voyage, and the nose-cutting of the mean sisters-in-law. The noses are restored after they pray to Mangala. Very fairytale like, one can argue.

Nowadays, folktales are stripped of power by modernity and material philosophies by labelling them as patriarchal. In fact, they were designed to help women cope with patriarchy, with the fairy godmothers and other deities serving as psychological anchors and rafts that one could hold on to in bad times.

This article is also listed under Devi, Indian Mythology, Society