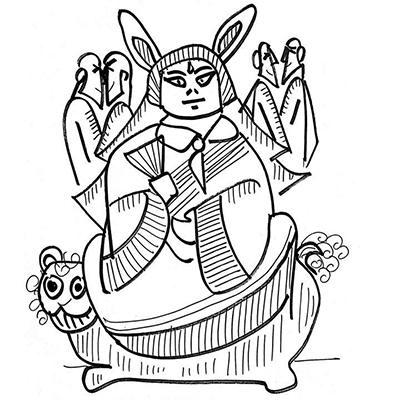 In Beijing, during the autumn festival, people buy images of a rabbit god who is said to have been sent by the moon-goddess to save people during an epidemic. But in Taiwan, there is memory of another rabbit god, Tu Shen, one who is matchmaker for homosexual men.

Once upon a time, a young soldier was caught looking at an imperial officer through a peephole in the bathroom. On questioning, he confessed he was drawn to the officer’s beauty. He confessed he loved men. The officials had the young soldier beaten to death. A month later, the ghost of the soldier appeared to many who knew him and told them that the gods of the underworld had refused to accept his spirit as he had committed no crime. Love was no crime. So he had to be treated as a venerable ancestor and a god. So to appease the ghost, a temple was built in his honour. He was visualised as a god holding another man in embrace. He was seen as the homosexual counterpart of the heterosexual matchmaker god of Chinese mythology. Since the local slang for gay men in Imperial China was ‘rabbit’, he came to be known as the rabbit god. But he has to be distinguished from the ‘rabbit god of the moon’.

In Chinese mythology, one of the eight Taoist immortals, Lan Caihe, is a being of ambiguous gender always shown holding a basket of flowers. There are tales of young male dragons flying through the air on the lookout for old men who they can sexually assault. Same-sex relationships between men is recounted in many Chinese legends. The men are either monks or warriors, or transgender prostitutes. In one story, the emperor cuts the sleeve of his robe so as to not wake up the young man who spent the night with him. In another story, the king orders that no beautiful men be brought before him so he can stay faithful to the young man, Lord Longyang, he is smitten by. Stories suggest that the relationship is always between older men and younger men, bisexual men and effeminate boys. Through such structuring, homosexual love is often rationalised in mainstream heterosexual circles.

Chinese descriptions of male homosexuality eclipse descriptions of female homosexuality. The two are not seen as related. Taoism explains same-sex affections as attraction of a male with high yin for a man with high yang. Some Taoist monks saw this as a disease, an imbalance of forces, and called for active suppression of these temples. Some argue this suppression was the result of growing importance given to celibacy under Buddhist influence. Indeed, the rabbit temples of the gay god were actively destroyed until they were resurrected in recent times as LGBTQ+ movements flourished in Taiwan, Singapore, China, as well as Korea and Japan.