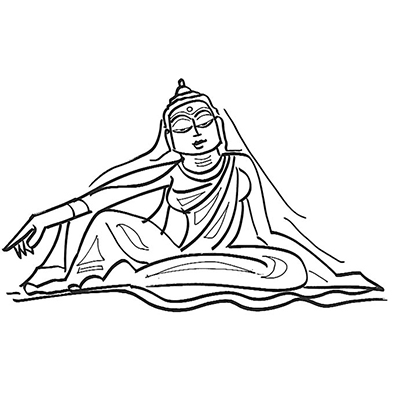 Buddhism originated about 2,500 years ago in the Gangetic plains. It gradually spread across and beyond India. As it spread, it transformed dramatically, responding to history and geography. In China, a female Bodhisattva, Guanyin, came into being. This is her story.

Initially, Buddha was venerated as a teacher from India. But, as the centuries passed, the historical Buddha gave way to the multiple mythological Buddhas who inhabits various plains of existence.

One such Buddha was the celestial Amitabha. From around 2,000 years ago, Buddha became seen less as a teacher and more a saviour figure, not just wise but also compassionate. The concept of Bodhisattva emerged: one who delays his own nirvana to help all suffering beings of the universe. One popular Bodhisattva was Avatilokeshwara, visualised 1,500 years ago as Padmapani or the lotus-holder, in the Ajanta caves. His stance is elegant, almost feminine.

Goddess worship and Tantra rose around 1,500 years ago in India. In Buddhism, there was increased reference to the Goddess Tara, placed next to Buddha and Bodhisattva. In some texts, Tara is described as residing in Chin-desha, or China. In others, a branch of Tantra is called Chin-achara, or the Chinese way. Taoism in China spoke of the harmony between male and female principles, the yang and the ying. In Chinese Taoist cultures, female shamans played a very important role. Did Tantra spread from India to China, or was it the other way round? We can only speculate. What we can be sure is that ideas beyond Buddhism were exchanged as the silk route connected India and China via Central Asia.

In China, people wanted a yin to the Buddha yang. If wisdom was masculine, there was need for a balancing feminine compassion. Tara was a supplementary deity, not a central deity. As time passed, the feminine took on a more central role in Chinese Buddhism. First, we find references to Bodhisattva taking female forms in scriptures. Then, we find images of androgynous Bodhisattva. Finally, images of female Bodhisattva start appearing following visions of a ‘lady in white’. She was named Gyanyin, probably an abbreviation of Guanshiyin, which means the same thing as Avatilokeshwara: one who gazes down to listen (to the cries of the suffering mortals).

All this happened probably because of Chinese women who were pushing back against increasingly patriarchal Confucian order that was overshadowing even the gender-balanced Taoism. Guanyin, who answers prayers, gives children, saves lost sailors, mingled and merged with local Taoist goddesses associated with the moon and the sea. Stories emerged of the compassionate princess, who wanted to be a nun and was tortured by her father for that decision; still she cut out her eyes and gave it to her father to cure him of a fatal illness. She was even linked to the Hindu Tantrik deity Chandi, and called Cundi-Avatilokeshwara (chun tie-guanyin).

Most importantly, Guanyin was probably popularised during the reign of the Empress Wu Zetian of the Tang Dynasty, 1,300 years ago, as she used Buddhism to consolidate her hold on the land, legitimise her rule and counter Confucian rivals who believed that ‘to ask a woman to rule is like asking a hen rather than rooster to crow at dawn.’ Was it her face that the Chinese saw when they prayed to the goddess of love and compassion? We can only wonder.