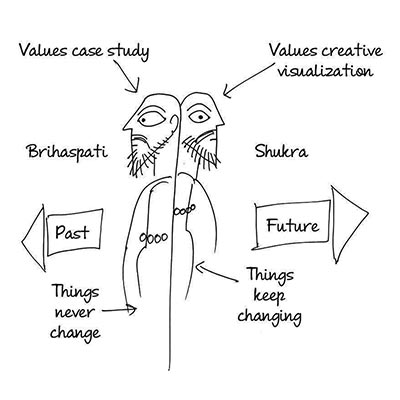 The scriptures seem to offer a value judgment when they associate Brihaspati with devas and Shukra with asuras. We have been conditioned to believe that devas are ‘gods’ and asuras are ‘demons’. But that is not entirely correct.

We forget that in temples when worshipping astrological deities we also worship asuras/demons like Rahu (demon of eclipse and confusion) and Ketu (demon of comets and restlessness) along with the demon-guru Shukra. For in traditional Hindu thought, there was no such thing as ‘demon’ — just various forces, all valid and valuable, in the universe that can benefit or harm us. Each force has to be invoked in appropriate measure.

Negatively speaking, to-do list assumes we will forget what needs to be done, while a check-list makes us feel that we are not trusted to get the job done. Both these lists help us organise our world, make it seem a little bit less chaotic, and in control.

In the Puranas, both devas and asuras are children of Brahma. The devas are seen as entitled beings who are often self-indulgent and incur the wrath of rishis who curse them to lose their fortune to the asuras. The asuras, by contrast, are presented as ambitious beings who earn boons, become powerful, spread terror, besiege the devas, and gain access to the deva fortune, until the devas strike back ferociously. Thus victory and defeat follows both devas and asuras with unfailing regularity. This creates the force and counter-force of the churn that keeps the world running. Thus to-do-list and check-list are like force and counter force that ensure we achieve what we want to achieve.

In many meetings, in the end, there is an obsession for to-do-list or action plan. It ensures that there is focus on implementation. Yet very few meetings begin with a check-list to ensure we have done what was decided in the prior meeting. Thus there is tendency to focus on the force, not the counter-force. Naturally the churn fails and we find that despite many to-do-lists not much gets done.

In Roman mythology, this concept of Shukra-Brihaspati is evoked through the deity called Janus, after which the first month in the year is named January. Janus is two-faced, one looks at the past as Brihaspati does and the other looks at the future as Shukra does. Unless we review the past, we should not think about the future. The past can be disturbing, full of failures. We don’t like it. We prefer to focus on the imaginations of the future over the failures of the past. And so we prepare to-do-lists which like New Year Resolutions usually fail.

It is easy to consider Shukra and Brihaspati as opposite to each other, after all they are force and counterforce. But they work only when there is no tug-of-war between them. When we are focussed on the check-list, we must forget about the to-do list. We must use the knowledge and insights gained in the success and failures that the check-list throws up to draw up the next to-do-list. And when drawing the to-do-list, we must let past knowledge inspire, not fetter. When Brihaspati and the devas are pulling, Shukra and the asuras have to pause. When Shukra and asuras are pulling, Brihaspati and devas have to pause. Thus the two lists create a power churn for any project management.