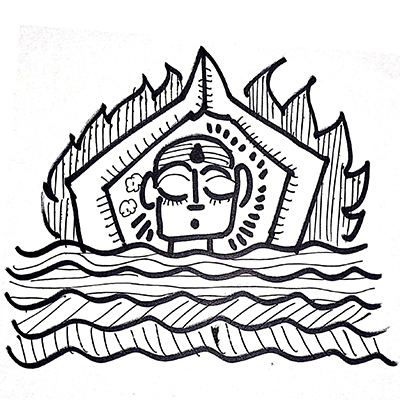 Chandragupta Maurya would always eat only what his guru Chanakya provided. One day, out of love, he gave this food to his favourite queen who died instantly. Chanakya rushed to the spot and explained to the king that his food contained poison given in small doses over years to protect him from special assassins called Vishkanya, women whose saliva contained venom. The queen at the time was pregnant. To save the child, Chanakya cut open her abdomen and pulled out the child. The child saved was named Bindusara. The mother died. When Bindusara grew up, his friends told him that Chanakya was responsible for his mother’s death. Bindusara refused to bow to Chanakya, after he became king. Realising he had lost the trust of the king, Chanakya decided to starve himself to death. The same way Chandragupta Maurya had starved himself to death. It is argued that this act of starving oneself to death, after completing worldly duties, was perhaps the result of the influence of the Jain monastic order on the Mauryan royal family.

The Jain monks believed outgrowing hunger enabled one to destroy all karmic burdens. Jain ascetics trained people to give up attachments to worldly life to the extent that they could give up food. This resulted in them being able to leave their mortal bodies voluntarily.

In the Ramayana, we hear of how Sita enters the earth. We hear of how Ram enters water and never rises again. Does this mean they ended their lives on earth by burying or drowning themselves? In the Mahabharata, we learn of the Pandavas retiring and then walking up a mountain in their old age hoping to find the entry to Indra’s paradise, Swarga? Does it mean they voluntarily jumped from atop mountains, a practice known in a few Viking communities? In the 13th century, we hear of Dnyaneshwar voluntarily giving up his mortal body. People have argued whether this samadhi was ritual suicide or a yogic practice that enabled evolved souls to give up their life voluntarily, forcing the breath out of the flesh.

In many cultures around the world, it was acceptable for people to voluntarily end their life. In Japanese and Greco-Roman societies, proud aristocrats would choose death over dishonour. Death by poison was considered inferior to death by cutting or stabbing oneself to death.

This Christian view that frowns upon suicide spread around the world during the colonial era. It is what is enshrined in the legal frameworks in most countries around the world. In India’s past, there were men who voluntarily cut their heads and offered it to gods. There were women who voluntarily leapt into the funeral pyre of their dead husbands. The idea of voluntarily terminating one’s life, like Chanakya and Chandragupta, remains a controversial topic. It was not so in ancient times.