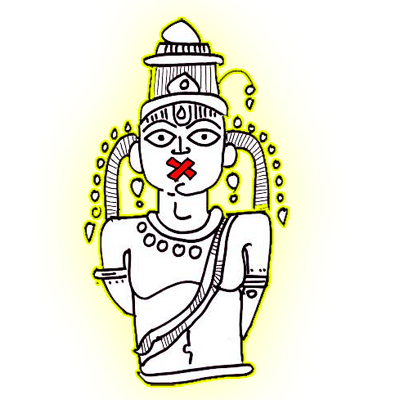 So many times I want to write about a politician or a businessman or a film star, but I dare not. They can get upset with my opinions. And when they are upset, I can get into trouble. They are like the gods of ancient times, angry and troublesome, locked in faraway mountains behind fortresses of clouds, bearing in their hands tridents and thunderbolts with which they can strike you if you upset them. You need them for your daily dose of time pass but you cannot have an opinion about them — at least not in a public forum. You can gossip all about them in informal networks so long as it is not in any official medium. You cannot speak of their bedroom habits or their drug habits or their arrogant attitude or their superstitions or their occult leanings. You can only praise them or say things that contribute to their media image. Censorship is thus a powerful way used by celebrities to control their public image. The same tool curiously is used by parents to control what is told to children about the gods.

Often I am approached by well-meaning people who want stories to be told to their children. So which story must one tell children? “Tell the Ramayana.” So I begin — Once upon a time, there was a king with three wives…And they interrupt, “Skip the three wives part. How can one talk about polygamy to children?” And then I come to the part where Ram abandons Sita following gossip in the city. And they interrupt again, “Can we end the Ramayana with the coronation part and skip this tragic ending?” In fact, many parents feel the Ramayana should not be told to children as it is a patriarchal narrative. They feel I should tell the story of Krishna. Which part? “The childhood part when he is so sweet and naughty.” And do we tell the story of how he stole clothes? “No, no, that is awkward.” And the part about Raas-Lila. “No, no, that is difficult to explain.” So shall I tell the story of Shiva? “Yes, except anything about the Lingam and the consumption of Bhang.” What about story of Durga? “Yes, Yes.” But moment I describe how Kali drinks blood I see eyebrows rise and gestures begging me to stop. “We are vegetarians.”

Every parent wants to control what their children must hear. Every celebrity wants to control what the media says about them. Is there a difference? Control is also exercised by those who profit by controlling media channels. One publisher of mine refused to publish my book on Krishna because what I wrote did not match his views on Krishna. “Skip all the violence part.” I refused. “Don’t say he killed. Say he liberated.” I refused. The publisher feared attack by fundamentalists. An uncomfortable point of view does not make profits. Naturally the book did not see the light of day. Thus the tales of our ancestors are edited and a very limited edition reaches the next generation. A whole volume of knowledge is ignored and sidelined because, “the children will not understand.”

I guess at the heart of censorship is this very patronizing attitude of control. We want to control the minds of others: we want to control what our fans, our children and our customers think about us. We forget that everyone is a free-thinking spirit and they can see beyond the media discourse and they can see beyond what parents tell, if they choose to. In Greek mythology, a hero is described as a human being who breaks free from the tyranny of the gods. Every human being, every child, can be a hero if they realize that the stories  they tell often have nothing to do with the truth but a lot to do with the bias of the storyteller and those who pay him/her.  But sadly, I also realize, that not everyone can be a hero. For many the censored and controlled story is the Truth.