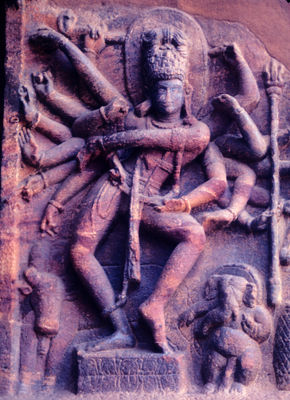 Why is Shiva-ratri one of the few Hindu festivals to be celebrated in the not-so-auspicious dark half of the lunar cycle? Why is it celebrated just as winter draws to a close? These are questions to which “real” answers may never be known. However, one can always speculate. Speculation helps one explore sacred mysteries and thus gain insight into the divine.

The traditional story is that on this night a thief climbed a Bilva tree, which is sacred to Shiva, to give his pursuers the slip. He spent the whole night on the tree, plucking leaves that – unknown to him – fell on a Shiva-linga. This act of unintended piety earned the thief an eternal place in the lord’s heart. Stories running along these lines are narrated on Shiva-ratri as devotees hold an all-night-vigil in Shiva-temples. But these narratives tell us why Shiva should be worshipped during Shiva-ratri. They do not tell us what makes Shiva-ratri sacred.

One story, popular in some parts of South India, says that it was on this night that Shiva drank Halahala, the cosmic poison churned by the gods and demons from the ocean of milk. The goddess Parvati did not want the poison to enter her husband’s body, so she caught hold of Shiva’s neck. The gods did not want Shiva to spit the poison out. So they began singing songs in praise of Shiva. With bated breath, the gods stayed awake wondering how Shiva could save the world without annoying his wife. Finally, at dawn, Shiva locked the poison in his throat for eternity until it turned his neck blue. The all-night-vigil on Shiva-ratri commemorates Shiva’s benevolence.

The unconventional tradition of worshipping Shiva in the dark half of the lunar cycle is not surprising considering there is nothing conventional about Shiva. He is the only god who does not adorn himself with flowers or jewels. He smears his body with ash, wraps himself with elephant hide and tiger skin and bedecks himself with serpents, wild Dhatura flowers and Rudraksha beads. He intoxicates himself with hemp, is surrounded by wild and fearsome Ganas and lives on icy barren mountains. The crescent moon on his head – the same moon that can be seen in the skies on Shiva-ratri – offers another possible reason why the 13th night of the waning moon is sacred to Shiva.

The moon-god Chandra was married to the 27 Nakshatras, lunar asterisms, but he preferred only the company of Rohini. The neglected wives complained to their father, Prajapati Daksha, who ordered Chandra to change his ways. When the moon-god did not, he was struck with the dreaded wasting-disease. As the days passed, Chandra’s luster waned. No one came to his rescue for fear of incurring Daksha’s wrath. In despair, Chandra turned to Shiva who placed the moon-god on his forehead where Daksha’s curse had no effect. The crescent-moon on Shiva’s head is a reminder of how Shiva’s grace saved the moon-god from oblivion. Those who fear death, those who cannot come to terms with the fleeting nature of existence therefore take refuge in the cosmic ascetic who has transcended the eternal cycle of birth and death.

In Tantra, the moon represents the cooler, submissive and fleeting aspect of Nature. The sun represents the warmer, dominating and eternal aspect of Nature. Together they represent the totality of life, the union of opposites. While Shiva represents lunar energy, Vishnu represents the solar. Shiva transcends worldly life, Vishnu actively participates in it. Shiva did not want to marry but Vishnu coaxed him into the cycle of existence. In Shiva’s willingness to be Devi’s groom one finds the reason why Maha-Shiva-ratri is celebrated just before the arrival of spring. It must be remembered that in the Hindu calendar, the festival to follow Shiva’s holy night is Holi, the festival of fertility, love and joy.

Shiva’s marriage to Parvati is a major theme of Shaiva lore and is often narrated during Shiva-ratri. The union transforms the hermit into the householder and couples world-rejection with world-affirmation. With the Devi by his side, the yogi becomes a bhogi. A balance is achieved between the spirit and the flesh, the ego and the infinite. Maybe that is what Shiva-ratri is all about. A time to stay awake through the night contemplating on the dualities of life – of mortal desires and immortal bliss, earthly obligations and heavenly aspirations, material needs and spiritual demands. When the balance is met, when Shiva is in the arms of Shakti, when the dance is in perfect harmony, there is truth, awareness and bliss – sad, chit, anand.