Caught in a Whirlpool 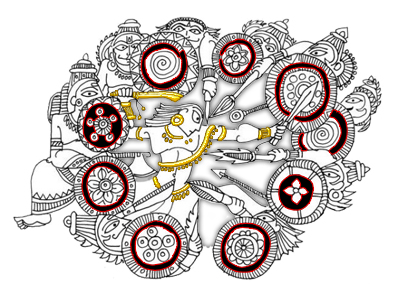 Abhimanyu was the son of Arjuna and Krishna’s sister, Subhadra. Although every Pandava had a child by Draupadi, and by other wives, his is the most popular tale of all, evoking great anguish.

As Arjuna was in the middle of explaining how to break the whirlpool battle formation or the Chakra-vyuha, Krishna interrupted Arjuna and made him leave Subhadra’s side. As a result, Abhimanyu learnt only how to break into the formation, not how to break out. This event played a key role in the death of Abhimanyu sixteen years later. Why did Krishna interrupt Abhimanyu’s learning? The reason for this has triggered many folktales across India.

According to one story, Abhimanyu was actually a Rakshasa. His demonic qualities would emerge if he was able to survive the Kurukshetra war. Krishna knew this and so, through this action, ensured his death in the war itself. According to another story, Abhimanyu was actually the son of the moon who was cursed to live on earth as a mortal. The moon missed his son so much that he begged Krishna to find a way to kill his son in the sixteenth year of his life. The only way to do so was to prevent him from learning the secrets of the Chakra-vyuha. The third, more sinister reading, is that Krishna knew how much Arjuna loved his son. Only the death of his son at the hands of his teacher would goad Arjuna to take the war more personally and fight more intensely.

Abhimanyu was barely two years old when the Pandavas gambled away their kingdom and went on their thirteen year exile; he was fifteen when they returned. It took a year to prepare for the war against the Kauravas, who refused to return the Pandava kingdom. Thus he was sixteen when the battle started.

Abhimanyu spent his childhood in Dwaraka with his uncles Krishna and Balaram. He fell in love with Balarama’s daughter, Vatsala, also known in some versions as Sasirekha. But Balarama wanted his daughter to marry a man with property, not a gambler’s son. So he invited Duryodhan’s son, Laxman, to accept his daughter’s hand in marriage. A heartbroken Abhimanyu appealed to Krishna who said he could not interfere, but advised the young boy to take the help of his wild cousin, Bhima’s son by the Rakshasi Hidimbi, Ghatotkacha. Ghatotkacha carried both Abhimanyu and Vatsala out of Dwaraka and got them secretly married in the forest. Ghatotkacha then used magic to take the form of Vatsala. He presented himself in the wedding ceremony. When Balarama did the ‘kanya-daan’, Ghatotkacha squeezed Laxman’s hand so hard that he fainted. When Duryodhana realized that Vatsala was actually Ghatotkacha, he was furious. Just as Subhadra had married Arjuna instead of him, Vatsala had married Arjuna’s son instead of his. Duped a second time, the event further fuelled Duryodhana’s hatred for the Pandavas.

When the Pandavas emerged from exile, Arjuna came with a gift for his son — a second wife, the princess Uttari of Matsya, daughter of Virata. The king wanted the princess to marry Arjuna but Arjuna felt she was more fit to be his daughter-in-law. Thus by the time the war at Kurukshetra was announced, Abhimanyu was a much married man with two wives. When he entered the battlefield, his second wife, Uttari, was already pregnant with Parikshit, the only descendent of the Pandavas who would survive the war.

On the 13th day of the war, Drona attacked the Pandava army with the dreaded Chakra-vyuha formation. The only warrior who could shatter this formation was Arjuna but Krishna had taken Arjuna to the far side of the battlefield to destroy the dreaded chariot-warriors, the Samsaptakas. The whirlpool soon surrounded the Pandavas. Yudhishtira was desperate. “Can no one break this formation?” he asked. Abhimanyu then revealed that he knew how to break into the formation, an act that would allow the Pandava army to escape. “But someone has to come back to save me as I do not know how to break out,” he said. Yudhishtira promised to come to come to Abhimanyu’s rescue once the army had escaped. Unfortunately,he was unable to do so; his path was blocked by Duryodhana’s brother-in-law, Jayadhrath.

Trapped in the Chakra-vyuha, young Abhimanyu, fought like a lion. He killed Duryodhana’s son, Laxman. But then, against all rules of war, he was attacked simultaneously by a number of Kaurava warriors. Karna broke his bow and chariot.  The other warriors surrounded him as hyenas attack an injured lion. The Pandavas trapped outside could only hear his cries as he was hacked to death. The last blow was struck by Dusshasana’s son. But before dying, Abhimanyu managed to kill him too.

“Beware of half-knowledge,” is a line often used by gurus. And Abhimanyu serves as a classical example for this.