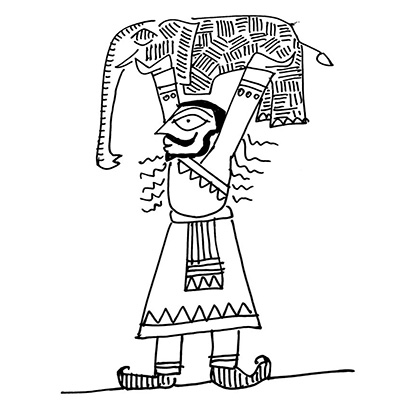 The Adi Purana, or primary Purana, mother of all later Puranas, constituted the fifth Veda compiled by Vyasa, as it presented Vedic ideas in story form. Historians, however, trace the rise of Puranic literature from 5th century onwards, the oldest being Vishnu Purana. Traditionally, there are 18 Maha-puranas or major texts, 18 Upa-purnas or minor texts, and hundreds of Kshetra-puranas, that tell the story of pilgrim spots, as well as Jati-puranas, that tell the story of different castes.

In the Kalika Purana, we find the story of how Parashurama killed the Kshatriyas on earth, but spared their unborn children, provided they were not raised to be warriors. Some of these children decided to invoke Shiva and ask him the right to use weapons. They asked, ‘Bana jaya astu’, may our arrows always be victorious. But Saraswati, invoked by Parashurama, twisted their tongue, and they said, ‘Vanijya astu’, may we become traders. On realising their mistake, they begged Shiva to teach them a skill, so Shiva asked Vishwakarma to teach them smithcraft. This is the caste story of coppersmiths who lived in Western India. Thus, the community sees itself as primarily Kshatriya, but forced by a twist of fate to be Vaishya.

The Jeth-malla Brahmins in Gujarat areas claim, through the Malla-purana, that their ancestors were taught wrestling by Krishna himself. We can argue endlessly if the community was first Brahmin who then became wrestlers, or a community of wrestlers and strongmen who identified themselves as Brahmins.

The Chamar community, or the leather-workers, who were at the bottom of the caste pyramid, had stories imposed by Brahmin authors, who claimed in various texts such as Puranas and dharma-shastras, that their community was the result of inter-marriage of caste and thus loss of purity, for example, the marriage between a Nishadha (born of Brahmin father and Shudra mother) and a Vaideha mother (born of Vaishya father and Brahmin mother). In other narratives, the community self-identified itself as kings of the Chanvar dynasty, who lost their status, because they broke the rules of ritual purity in a crisis. They speak of a king with two daughters, Chamu and Bamu, each of whom had a son. One day an elephant died in the palace, and the king asked his grandsons to take the corpse out. Chamu’s son, who was stronger, picked up the elephant with one hand and carried it out. Bhamu’s son, who was smarter, declared Chamu’s son to be polluted, hence unfit to return to the palace. The descendants of Chamu’s son came to be known as Chamars.

Jati puranas are written in local languages, and many exist purely in oral forms. Some are meant to keep people in their place. Others are meant to give a higher status to a caste, or justify its profession, or simply evoke pride. These stories reveal the power of the omnipresent caste hierarchy of South Asia. We can reject them as ‘fantasies’ but such ‘fantasies’ have always shaped the real lives of real people, as they do today. They are therefore, to be respected as subjective truths.