Cast into the Forest 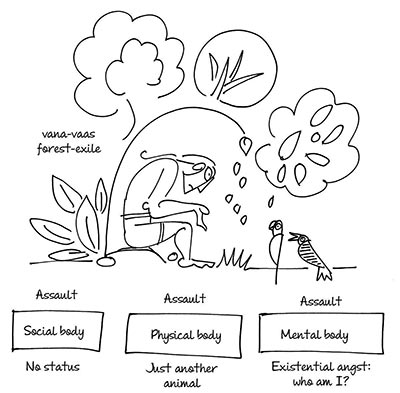 A businessman asked me to solve a problem. He was a self-made man. He began with nothing. His father was a peon in a government office. He was now a millionaire with a house in Delhi and farmhouses in Punjab and offices in Dubai. But neither his son nor his daughter seemed to share his drive. They lacked his insight. They were more interested in playing ‘boss’, ordering people around, expecting everyone to follow their commands.

I asked the businessman, “Do you love your children?”

“Yes,” he replied, startled by the question. “I have made sure they got everything I did not get as a child.”

I smiled. For he just revealed what the problem was.

The way we see the world depends a lot on how we are raised. The businessman grew up in poverty, surrounded by people unwilling or unable to give him what he wanted, and that poverty provoked a ruthless drive in him that made what he was. His children grew up in affluence, surrounded by people who gave them everything that they wanted. What did that affluence provoke? How could it be expected to provoke the same drive as poverty?

In the Ramayana, Ram is raised in the comfort of the palace and educated in the security of Vasishtha’s hermitage. He is the crown prince, much adored by his father, Dashratha, the king of Ayodhya, who wants to shower him with love and affection. But then an ex-king, Kaushika, now a hermit with a new name, Vishwamitra, appears in the court, and insists on taking Ram to the forest with him. “I need your son to provide security while I conduct my yagna.” The king offers to send his army, even come himself, but the ex-king insist that only Ram should come, no one else. After much persuasion, Ram is forced to follow Vishwamitra. In the forest, Ram learns new skills and successfully protects the yagna, killing numerous demons along the way.

This story from the Bala-kanda of the Ramayana is key to talent management. The forest is a metaphor where the prince is denied all pleasures and entitlements he takes for granted in the palace. Here he is just prey to the predator with no social standing. He not only has to survive on his own strength and wits, he is expected to protect those around him, his age notwithstanding. Imagine Ram sleeping alone in the forest, without servants or guards or even a guru watching over his well-being, enveloped by the sound of hungry animals and birds and reptiles. The forest is no sylvan retreat as we are given to believe in comic books: no guarantee of food or water. The young prince has to fend for himself. What kind of psychological impact it has on a future king? You learn about survival, about fear, about predators and prey, the importance of rules and strategy and teamwork. Ram who returns home is fit to rule.

Mahabharata clearly differentiates between Pandavas and Kauravas. The former are born in the forest, and have to return to the forest three times: once to study in the hermitage of their tutor Drona, next when their new palace is burned to the ground by their cousins, and finally when they gamble their kingdom away for 13 years. Each forest sojourn is a time to learn what kingship is all about. What it means to have nothing. It generates skill, and empathy.

In medieval times, kings sent their sons into battlefield. It taught you about the brutality of life, the machinations of palace politics, and the price of royal power. It prepared you to wear the crown. It is in trauma does Saraswati, goddess of knowledge, become most accessible.

What do young men and women in affluent families have that prepares them to be good leaders other than imagined problems or maybe internal drive born of some psychological trauma? How does the older generation of self-made businessmen pass it on to the next generation? In trading communities, children were encouraged to start their own businesses early in life. Failure was seen as learning and training for the future. Success enabled families to identity talent. What are new business families doing to provoke this in children?

An MBA in Harvard does not prepare you for the grit realities of the Indian bazaar. Perhaps that is why many of the young and rich and talented are turning to the virtual world and to virtual marketplaces which are so different from brick-and-mortar spaces but which is so much like gaming. You don’t have to deal with the idiosyncrasies of people. You can always switch it off with a tap on the screen, and go to sleep in the comfort of your air-conditioned suite.