Can I be a Hindu and still an atheist? 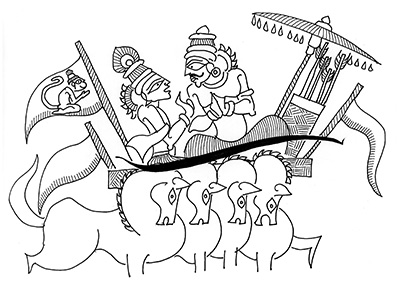 Since no one can actually define Hinduism, the simple answer is: yes. Politicians and supremacists who try to define, and homogenise, Hinduism, may disagree and insist Hinduism is theist. The problem is with how we define God.

When people around the world use words like religion, they refer mostly to Judaism, Christianity and Islam. When they use the word God (singular, capitalised, masculine), they are in all probability referring to the God of Abraham, that informs Judaism, Christianity and Islam. This is God who is outside humanity, and outside creation, who creates the world and humanity, loves humanity, and gives instructions through prophets on how humans should live. This God has cast down humanity to the world because they broke his rule in the perfect Eden. He gives humans one chance to live, to prove their love for him. In Judaic mythology, he punishes those who do not listen to him. In Christian mythology, he sacrifices his own son Jesus for the sins of humanity. In Islamic mythology, he appoints Prophet Muhammad as the last of his prophets. The most important aspect of these dominant religions is the idea of “covenant” or contract with God, expressed through the rite of baptism in Christianity, and circumcision in Judaism and Islam. These Abrahamic mythologies are strongly influenced by Zoroastrian mythology of ancient Persia, from where came ideas such as Devil, Heaven and Hell, and Archangels. In Abrahamic mythology, there is one God. So the concept of many gods is false.

It is important to clarify that when Hindus use the word God, it is not the God of Abraham. God in Hinduism can be masculine or feminine, singular or plural, and limitless or limited by space and time. Limitless divine is spelt with capitalisation; limited divine is spelt without capitalisation. Thus we can have Gods, Goddesses, gods and goddesses. All are manifestations of the divine. There is no concept of Devil. Most important, Hinduism is rooted in the idea of rebirth (karma). There is no concept of Eden, Original Sin, commandments or one life. Hindu idea of God does not speak so much about rejecting false gods as it does about understanding infinite forms of God.

Hindu mythology assumes the material world to be self-sustaining and self-created, but dependent on a spiritual principle (atma), non-material more accurately, described variously as consciousness, soul, awareness, essentially non-measurable. This is explained in various ways, using various frameworks, in Vedanta, Tantra, Puranas, and Agamas. Details vary in different sampradayas and paramparas. Details have changed over history (details in pre-Buddhist era are different from colonial era), and they vary over geography (details in Odia traditions are very different from Rajasthani ones).

ganesh1_041517075957.jpg Limitless forms of param-atma are Vishnu and Shiva and Devi, as well as Ganesha and Kartikeya. Photo: Reuters

God in Hinduism is often explained by modern gurus as cosmic consciousness (param-atma) who is located in every living creature (jiva-atma). Limitless forms of param-atma are Vishnu and Shiva and Devi, as well as Ganesha and Kartikeya. Limited forms of param-atma are Ram, Krishna and Ganga, for example, as they are located on earth and so experience mortality. However, things are not so simple: Ram and Krishna can be God and god simultaneously. Hanuman transforms from god to God in the Ramayana. Trees, animals, rocks and even sages, can be seen as gods, or Gods. Gods take mortal forms to enable the god-within-us to become God, move from the world of limitations to the world of limitlessness. Limited forms entrap us in the world of ego, hunger, fear, death. Limitless liberates us, we merge with the cosmic, and are eternally tranquil.

It is significant to note that Buddhism and Jainism, which also believe in rebirth, and have many overlapping concepts, have no concept of God, who created the world, who rewards or punishes humanity for their actions. Buddhism rejects the idea of atma. Jains reject the concept of param-atma, but not jiva-atma. Both value teachers, sages who have attained infinite wisdom (kaivalya), hence called bhagavan.

In Hinduism, bhagavan and ishwar are terms used for limitless divine. The difference is that bhagavan engages with the material world more than ishwar who is distant and aloof. Vishnu is often called bhagavan and Shiva is often called ishwar. But like everything Hindu, these definitions and nomenclatures are relatively fluid.

More than believing in an external all-powerful God, Hinduism is about discovering God-ness in ourselves, by reflecting on God outside us, hearing God’s stories and venerating his, or her, images. One can say that a Hindu theist is subscribing to the Hindu definition of God while a Hindu atheist is rejecting the Abrahamic definition of God.