Can Hanuman Protect Us From Political Sorcery? 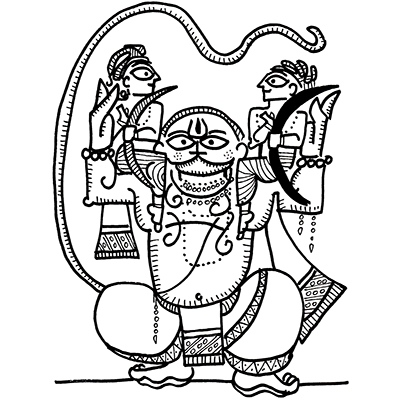 Hanuman Chalisa is a 400-year-old Awadhi poem of forty (chalis) verses, aimed at invoking Hanuman to get health, wealth, wisdom, security, and success.

Jai Hanuman Gyan gun sagar. Jai Kapis Tihun lok ujagar.
Victory to Hanuman who is the ocean of wisdom and virtue. Victory to the divine amongst monkeys who illuminates the three worlds.

As per legend, Hanuman Chalisa was composed by the venerable poet-saint Tulsidas, though some scholars believe the poem was ascribed to him in later times. There are legends about what inspired this writing

In one version, the Mughal king Akbar wanted Tulsidas to show miracles, or write verses in praise of him, and had him imprisoned until he did so. In prison, Tulsidas composed these verses, and this prompted a troop of monkeys to create havoc until Tulsidas was released. In the other version, Tulsidas – like many bhakti poets of the time – faced great opposition from Brahmins in the wake of retelling the Sanskrit Valmiki Ramayana in the language of the common man. They ‘trolled’ him with convoluted logic, argumentative scholars, thieves, goons, even sorcerers. But Tulsidas survived the pressure, by composing the Hanuman Chalisa. Depending on one’s political leanings, one legend is accepted as the truth. But in either case it is clear, it was composed to rescue the poet from tormentors.

In the wake of Muslim invasion, fearing an attack on structures, Hindu expression became less material and more literary. Instead of building temples, people preferred composing songs, stories, dance, and theatre to invoke the divine, especially in the Gangetic plains. Hence the proliferation of Bhakti literature there in this period.

The literature was mostly in vernacular, a departure from the old ways via Brahmins, and via Sanskrit mantras. Works like Hanuman Chalisa allowed the common man to address gods directly, bypassing doorkeepers and feudal lords.

However, not all gods could be directly addressed so. In the hierarchy of Hindu pantheon, Hanuman, the forest-dwelling divine monkey, seemed more accessible, than the distant regal Ram, or the even more distant Vishnu in Vaikuntha, or the formless divine of Vedas (nirguna brahman).

Hanuman’s image was found at the frontier of villages, under trees, a guardian, and a friend. He was a curious mix of fierce strength, stunning wisdom as well as humour. He was a poet and a musician, a prankster as well as a warrior. Maybe Hanuman was Shiva himself, taking a form to teach his own devotee Ravana, a lesson or two, for misusing his privilege as Brahmin and position as Lanka’s king.

Like Shiva, who destroyed Daksha’s yagna, Hanuman saw through the delusion of social hierarchy. He knew that every Rakshasa was not a bad person, as we learn from this verse from the Hanuman Chalisa.

Tumharo mantra Vibheeshan maana. Lankeshwar bhaye sub jag jana.
Your counsel that Vibhishan accepted. Made him Lord of Lanka, as the world knows.

Hanuman Chalisa is meant to calm the restless mind, not evoke rage. Hindu gods are never angry. Hindu gods are worshipped for transcending the ego, not indulging the ego. That is why Hindu gods, including Hanuman, are shown with a relaxed smile even in battle, their aggression a sort of a performance (leela). Modern artists prefer reimagining Hindu gods like Marvel comic heroes and villains, an indicator not of Hinduism limitation but the artist’s poor understanding of Hinduism, a poor understanding enabled by past governments and exploited by current politicians.

Hanuman’s so-called angry face, popular in posters, is a fierce face meant to frighten monsters away. It’s a very popular Tantrik talisman. The south-facing (daskin-murti) Hanuman with multiple arms and heads is mean to protect people from ghosts and goblins. The south here is not the geographical south as North Indian Hindi-speaking Aryan supremacists commonly assume, but the metaphorical south, associated with Yama, the god of death, where ghosts lurk, awaiting rebirth.

Hanuman’s popularity spread when he was seen as a force to defeat occult forces. Around the time of the composition of Hanuman Chalisa, another Ramayana was composed known as Adbhut Ramayana based on Tantrik ideals. Here Hanuman is rescues Ram and Lakshman from sorcerers Mahiravana and Ahiravana who live in Patala, the subterranean region, and wish to sacrifice the brothers to Patala Bhairavi Kali, the goddess of Tantra.

Sadhu Sant ke tum Rakhware Asur nikandan Ram dulhare.
Sages and saints Are protected by you. You who destroy demons are much loved by Ram.

Patala literally means the land beneath (tala) the feet (pa). Mahi means earth as well as buffalo. Ahi means serpent. Mahi and Ahi are related to Ravana. They are forms of Ravana, we can say. These stories are not found in Valmiki Ramayana that was composed 2000 years ago. These stories are later stories from India’s Tantrik Age, when more and more people took refuge in the supernatural to escape the harsh realities of life, much like children today finding joy in fantasy and sci-fi novels to escape the pressures of school and family and friends.

Using occult forces of Patala, Ravana unleashes magic against Ram’s army as well as Sita. He creates illusions to trick Ram into believing Sita is dead, and Sita into believing Ram is dead. He tries to torment the vanaras with nightmares and hallucinations filled with ghosts and goblins, embodying their deepest darkest fears. Patala is a metaphor for the human unconscious. Hanuman enters this terrifying zone where the sorcerers plan to behead Ram. Hanuman tells the story of Ram and Sita to the goddess and wins her love and support. In other words, Hanuman calms the goddess, reduces her rage, her thirst, and enables her to reject the dark ambitions of Mahiravana and Ahiravana and support Ram and Lakshman instead.

Ghosts and monsters are the memories that torment us. Hence ghosts are referred to as ‘bhoot’ which means the same thing as past. Hence the most famous lines of the Hanuman Chalisa.

But politicians will keep reminding people about the past, even create false memories, to evoke passions and rage, to justify violence, seed outrage and victimhood, to win votes. Politicians are modern-day sorcerers who can haunt the current with Patala, so that we are distracted from aspirations of paradise (Swarga). But we can trust Hanuman to save us from political sorcery.

Aware that I lack intelligence, I recollect the son of the wind-god (Hanuman).
He will surely grant me strength, intelligence, knowledge and take away all problems and afflictions.